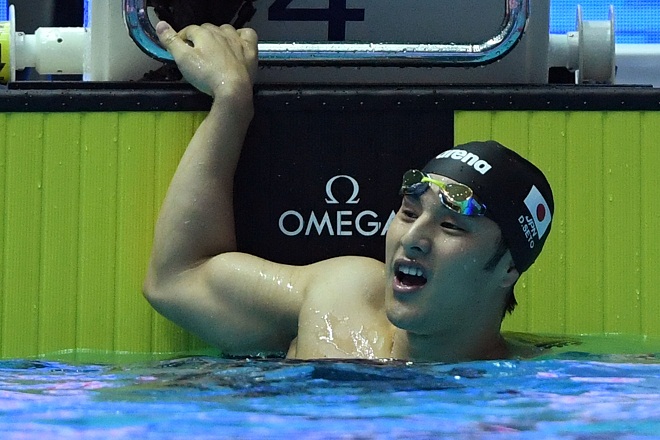 Seto, who captained the Japanese men's delegation, took part in a total of nine events at the world championships, which ended on Sunday.

He is the first Japanese man to win gold in two events in a single world swimming championships since Kosuke Kitajima clinched gold in the 100- and 200-meter breaststroke races in 2003.

Seto has captured a total of four world championships gold medals, the most by a Japanese swimmer.

Looking back at the latest world championships, however, Seto indicated that he is not fully satisfied with his performances.

He won the 400-meter medley partly because his biggest rival, Chase Kalisz of the United States, failed to qualify for the event. Seto also failed to achieve his personal goal of breaking the Japanese record for the discipline, possibly as a result of not facing a major threat for the gold.

"I was lucky this time," Seto said. "If I train more harshly, to the extent that I may want to stop swimming, I should get good results next year (at the Tokyo Olympics)."

"Seto has a lot more to do," his coach, Takayuki Umehara, said. "Real strength lies in whether he can whip out record times regardless of opponents."

"The last race was not good (because I didn't break the Japanese record), so I rate my overall performances at around 80 out of a full 100 points," Seto said. Jiji Press