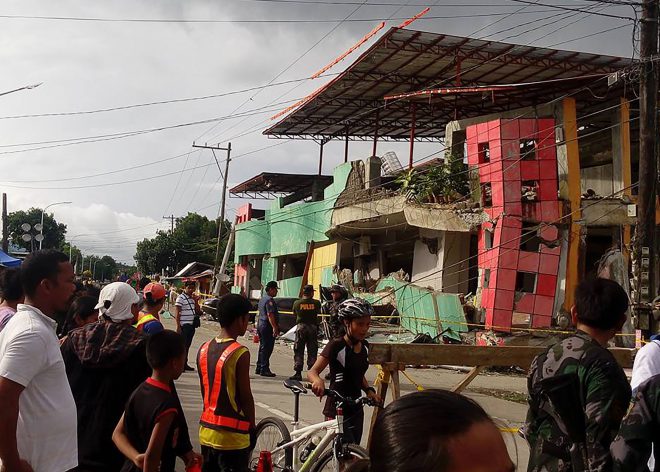 The National Risk Reduction and Management Council (NDRRMC) said majority of areas in Eastern Visayas are experiencing power outage because of a magnitude 6.5 earthquake that hit the province of Leyte on Thursday afternoon. Two people were reported killed, police reported. They were Gerry Movilla,  40,  whose death was caused by a collapsed building in Kananga and  Rhissa Rosales, 19, of  Ormoc who was struck by concrete hollow blocks “Majority of eastern Visayas do not have power supply. It is because a part of a geothermal plant located in Leyte,” Romina Marasigan NDRRMC spokesperson told reporters in Camp Aguinaldo. The epicenter of the intensity 6.5 earthquake is near the municipality of Kananga where geothermal plants are located. The Department of Energy, in a statement, said Leyte and Bohol experienced total power failure but Cebu, Negros and Panay power supply was also affected by the earthquake. The department added that the National Grid Corp of the Philippines “seeks t reassess the extent of the damage to its Tongonan-Kananga 158 kilovolts line as well as other transmission facilities in the entire Visayas region.” Marasigan said their agency haa recorded a total of 72 people injured and two others died because of the earthquake. She said six victims were rescued from the building that collapsed in Kananga, Leyte during the earthquake. Aside from the building that collapsed in Kananga, a landslide was reported in Mt. Amandiwing, Brgy. Rubias, Jaro, Leyte. As of 5 am, the PHIVOLCS has recorded a total of 241 aftershocks ranging from magnitude 1.5 to 4.3 earthquakes. (Robina Asido/DMS)