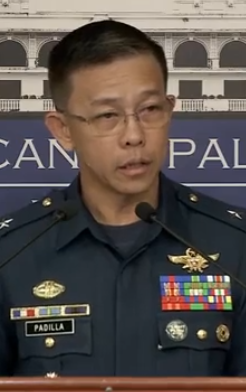 The two remaining Abu Sayyaf bandits, who traveled to Bohol with the aim to kidnap tourists, have been fighting for their survival as government troops pursue them, a military spokesman said on Tuesday. In a press briefing in Malacanang. Brig. Gen. Restituto Padilla expressed confidence the Armed Forces of the Philippines has "adequately addressed" the threat brought by the Abu Sayyaf in Bohol, a island province which is a major tourist destination. "The Bohol incident manifested a very deep-seated plan on the part of terrorists to sow discord and to target high-value individuals where they can earn a lot from," he said. "And with the events that unfolded beginning Holy Week up to the last encounters last Saturday, we are confident that we have adequately addressed them. And the two or three remaining individuals -- one of whom we believe to have expired because of exposure to the elements and of hunger --- are now down to two who are fighting for their survival," Padilla added. Padilla said the two who "are still being hunted is known to be in an area where we are closely guarding and have encircled." "And that because of their long exposure to the elements, what they are doing now is to fight for their survival," he said. Padilla said the AFP has been addressing the threat of terrorism "proactively." He cited the series of focused military operations in ZamBaSulTa area, covering Zamboanga Peninsula, Basilan, Sulu, Tawi-Tawi. He said the operations have all been going on on schedule. "We have set deadlines for ourselves to degrade their capacities and we by ourselves think that we are going to meet our targets by the end of July," he said, noting the targets are to "degrade" the Abu Sayyaf Group and the Maute Group. With the continued focus operations, Padilla has estimated that from a high of 500 Abu Sayyaf members, their number is now down to "about 300 or less." He also denied reports some Abu Sayyaf members were spotted in some areas outside Mindanao, like Palawan. "Many of these reports have been checked (and) been found to be untrue," he said. He also said the military has "successfully addressed" the threat from local terrorists and lawless elements of Piagapo area in Lanao Del Sur where of the 36 believed to have been killed, there were foreign-looking nationals. "The information that was on hand indicated that there could be foreigners from Indonesia and Malaysia that are with this group," he said. (Celerina Monte/DMS)