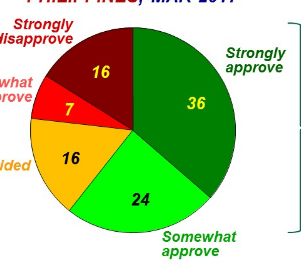 Majority of the Filipinos have approved the proposal to reimpose the death penalty on heinous crimes related to illegal drugs, an independent polling firm said Tuesday.. The survey conducted on March 25-28 among 1,200 adult Filipinos conducted by the Social Weather Stations showed that 61 percent of the respondents have “strongly/somewhat approved" of the re-imposition of the capital punishment to crimes connected to illicit drugs, while 23 percent were "somewhat/strongly disapproved" or a net approval score of +38, classified as "good." The survey was conducted as the House of Representatives approved its version of the proposed bill to reimpose death penalty on heinous crimes related to illegal drugs. While there is a pending bill in Congress, only few Filipinos have the knowledge regarding the proposed measure, SWS said. Only 13 percent of the respondents answered they have "extensive" knowledge; 35 percent have "partial but sufficient" knowledge; 43 percent have "only a little" knowledge; and 10 percent have "almost nothing or nothing." Net approval for the House of Representatives' proposal to re-impose capital punishment was highest in Metro Manila, at very good +58 (75 percent approve, 17 percent disapprove), followed by Balance Luzon, at very good +39 (63 percent approve, 24 percent disapprove), Mindanao at very good +35 (53 percent approve, 17 percent disapprove, correctly rounded), and Visayas at moderate +25 (56 percent approve, 31 percent disapprove). By class, net approval of the proposal was highest in class ABC at very good +62 (76 percent approve, 14 percent disapprove), followed by class D at good +40 (62 percent approve, 22 percent disapprove), and class E at moderate +21 (50 percent approve, 29 percent disapprove). Presidential Spokesperson Ernesto Abella welcomed the result of the SWS survey regarding the support of most Filipinos on the reimposition of the capital punishment on crimes involving illegal drugs. "The latest SWS survey showing 61 percent of the Filipino people support the proposed death penalty affirms the President's (Rodrigo Duterte) leadership platform anchored on peace and order as well as his strong stance against illegal hard drugs and criminality," he said. The results of the survey proved the House of Representatives' decision last month to pass the death penalty bill is "on the right track and accurately reflects the pulse of the Filipino people," he said. Abella reiterated the president is determined to fulfill his promise to make a safer and more secure place for the people and eventually pave the way for sustained economic progress to uplift the lives of the Filipinos especially the poor. Celerina Monte/DMS