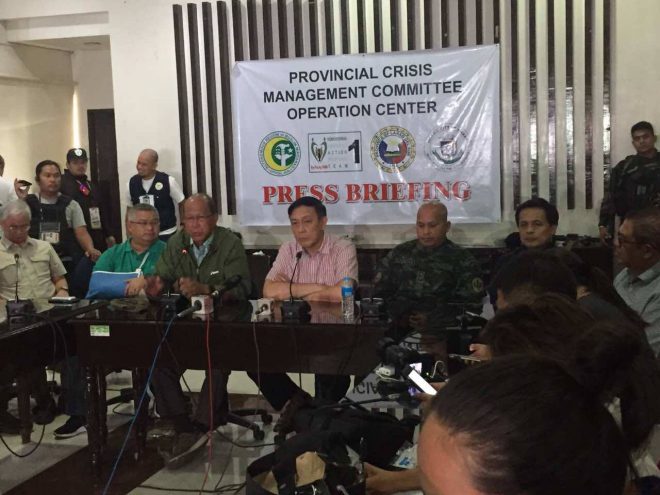 AFP, DND to submit recommendation on martial law before July 23

The Armed Forces of the Philippines (AFP) and Department of National Defense (DND)’s recommendations whether martial law in Mindanao will be lifted or extended will be submitted to the president before its deadline of July 23, a military spokesman said Thursday. “(AFP Chief of Staff) Gen. (Eduardo) Ano and I will be making the recommendation soon to the president. We do not know if it is to lift or to extend. We ask what happened in the area not only Marawi but all over Mindanao, so let’s wait for that time and I’m sure that it will be  (a) well-informed recommendation to the president from us,” Defense Secretary Delfin Lorenzana told reporters in a press briefing in Marawi City. In a press conference in Camp Aguinaldo also Thursday, Brig. Gen. Restituto Padilla, Armed Forces of the Philippines (AFP) spokesman, said the military are still conducting their assessment. “Our president said before that he will defer on the recommendation of the military whether it (Martial Law) will be extended or not. So we are preparing for that but it is not yet finished and we have not yet submitted this recommendation, “ said Padilla. Padilla explained part of the assessment is to determine if the conditions set during the declaration of the martial law were met. “When the martial law started, we set conditions which we have to achieve on the 60-day  deadline on the assessment that were going to do. We will study if these conditions were already achieved. In case it was not yet met there is a need to continue martial law,” he said. “But whatever recommendations will be forwarded to the president we can guarantee you that (it) will be something that will be well thought and will be something that will have basis, but the final decision will be the decision with the political leadership,” Padilla added. Padilla said the recommendation will be submitted to the president before the martial law will end this month. “The assessment is on-going all the inputs were being gathered and will be shared to the senior leaders next week because the battle is ongoing,” he said. “The situation is still fluid. The situation or the condition that is present right now may not be the same...next week now. We will start assessment once this week is over so we will need about one week more so that’s enough time for them to do assessment,” he added.  (Robina Asido/DMS)