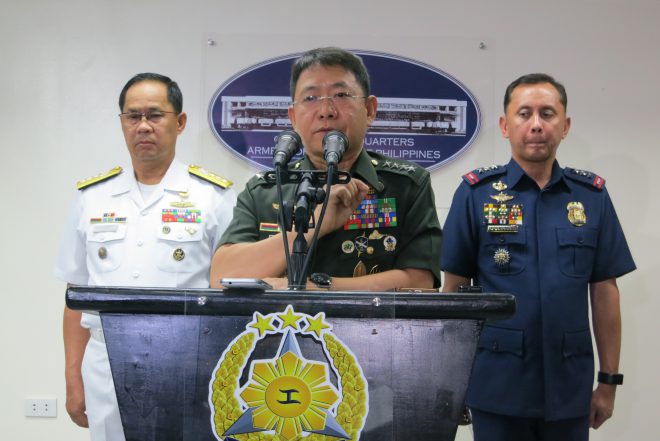 Ano said he was surprised he was selected DILG secretary

Armed Forces of the Philippines (AFP) Chief of Staff General Eduardo Ano admitted he was surprised by the announcement of the president to appoint him as the next secretary of Department of Interior and Local Government (DILG) but he vowed to do his best. “If we can contribute then we will. I will do my best to be able to contribute,” Ano said. “Well I am surprised because very early although there is already a talk, talk that I’m being considered for a government position once I retire. Not this soon, very soon. The announcement earlier was unexpected,” he added. Ano did not say when he will assume the DILG portfolio but he said if the position will be given to him before October he would have to seek early retirement from the AFP. “I cannot answer specifically but maybe what I'll do is prepare because that will depend on our president on when. If it’s earlier than October, of course I have to retire early,” he said. “There is no specific date yet. I will still continue and focus on my job as chief of staff, We still have a lot of tasks to do. The right time will come always,” he added. Ano who became AFP Chief of Staff late last year was supposed to retire in October when he reaches the retirement age of 56. When asked about his possible thrusts in the DILG, Ano mentioned the importance of DILG’s role in resolving the internal security problem. “I know the role of DILG in solving our internal security problem. Then of course, it is also a good opportunity to influence the whole government to help on the total effort of the government,” he said. In a text message to the Daily Manila Shimbun, AFP spokesman Brig. Gen. Restituto Padilla said the military is honored by Ano’s appointment. “We are honored by this announcement. Knowing how good a leader and officer Gen Año is makes us confident that he will do our Armed Forces and our country proud once he assumes his new post,” Padilla said. (Robina Asido/DMS)