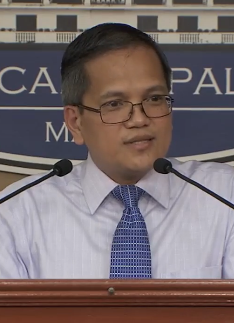 Non-inclusion of the arbitral ruling and China's "militarization" in the South China Sea in the Chairman's Statement during the end of the 30th Association of Southeast Asian Nations (ASEAN) Summit reflected what was discussed by the leaders, the Department of Foreign Affairs (DFA) said on Tuesday. In a press briefing in Malacanang, DFA-ASEAN Affairs Executive Director Zaldy Patron said no one from the 10 ASEAN leaders mentioned about the July 2016 award to the Philippines by The Hague-based Permanent Court of Arbitration. "We want to reflect as much as possible the discussion as accurately as possible of the leaders and there was no one who has strongly pushed or mentioned anything about land reclamation and militarization," Patron said. "There is no mention of arbitration because last year, even last year in Vientiane, there was no consensus to have it reflected in any of the ASEAN statements," he added. Patron denied China had influenced Duterte and other Southeast Asian leaders in not mentioning in the chairman's statement the PCA ruling and the militarization in the South China Sea. The DFA official said the ASEAN leaders "exercised their independence. They should be free from any interference from any countries." "So we take it to mean that they made their decisions independently. So we don't see any factor coming from any Dialogue Partner," Patron said. China is one of the ASEAN's dialogue partners. Patron said Southeast Asian leaders "highlighted the improving relations between ASEAN Member States or ASEAN and China and the need to conclude the framework for the Code of Conduct. So that was the emphasis given." Even other claimant countries in the South China Sea, such as Vietnam, Brunei and Malaysia, did not raise China's militarization in the disputed waters, he said. With the Philippine chairmanship of the ASEAN, Patron said there is "good progress" as far as drafting of the framework of the Code of Conduct of Parties in the South China Sea is concerned. "Well, at least there were agreements on the items or the elements that will be included in that framework, okay? And this is very different," he said. "Whereas before, China and ASEAN Member States do not even want to start discussion on the framework of Code of Conduct. But under the Philippine chairmanship, we have seen a lot of movements in the discussion and China has already made an announcement that it’s also supportive of having a framework of the COC. So that is something that we would like to take advantage of. It’s a step forward to having a full and effective COC," he added. Patron refused to give further details of the proposed framework. Some quarters have criticized Duterte for not including in his statement the PCA ruling and Beijing's militarization in the South China Sea. Even before the Summit, Duterte was consistent in saying that he would not raise the arbitral ruling during his meeting with other Southeast Asian leaders. But he has said that he would bring up the decision to China before his term ends. (Celerina Monte/DMS)