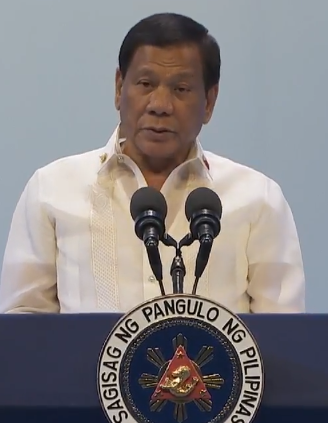 ASEAN pushing for Code of Conduct in South China Sea before end of year: Duterte

President Rodrigo Duterte said on Saturday the Southeast Asian countries have been pushing for a Code of Conduct of Parties in the South China Sea before the end of the year. Duterte disclosed this during his press conference at the end of the 30th Association of Southeast Asian Nations Summit in Pasay City. He said there was "no terms of reference, but we want Code of Conduct enacted, at the very least before end of this year so that everybody will feel comfortable sailing there because if not then, it remains to be a flashpoint," he said. ASEAN and China have been working for a COC framework, which they hope to be completed within the year. Aside from the Philippines, three ASEAN countries, which have claims in the South China Sea are Brunei Darussalam, Malaysia and Vietnam. China has been claiming almost the entire South China Sea. Duterte noted there are "three flashpoints" in Asia, such as the South China Sea, the Korean Peninsula, and the Middle East. "For those who are peace-loving, just like me, I don't want trouble. You have to be very careful," he said. China has been criticized for the reported "militarization" in the South China Sea where it built seven artificial islands. Duterte said it would be "useless" to discuss China's buildup in the disputed waters. "It would be useless except for fighting terrorism," he said. The Philippine government has yet to release Duterte's statement, being the chairman of ASEAN. It was not yet sure how the South China Sea issue was discussed in the chairman's statement. (Celerina Monte/DMS)