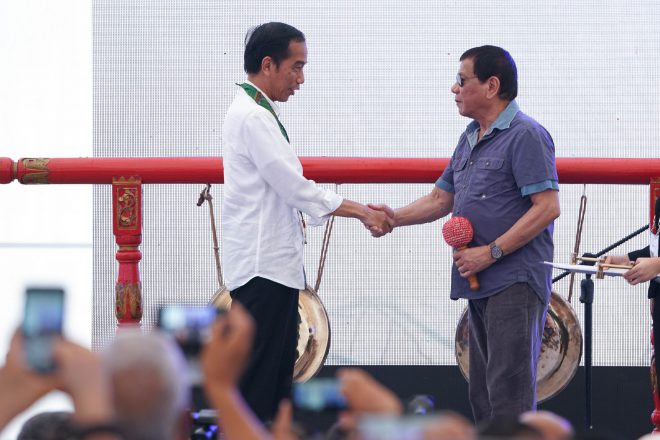 President Rodrigo Duterte and Indonesian President Joko Widodo led on Sunday the launching of a ferry service, which they hope to provide greater accessibility and open more opportunities for the two countries as well as with other Southeast Asian nations. After attending the 30th Association of Southeast Asian Nations Summit in Manila, Widodo joined Duterte in Davao City to formally launch the maiden voyage of the ASEAN roll-on roll-off (RoRo) Shipping Network, which will cross the cities of Davao and General Santos in Mindanao and Bitung in North Sulawesi, Indonesia. "We are hopeful that by opening new ports and exploring possible new routes, we will stimulate trade, tourism and other areas of development among ASEAN member-states," Duterte said during the launching ceremony. The RoRo service is expected to reduce shipping time of transported goods from the usual five weeks to just two or three days. Duterte urged the private sector to play their part in harnessing the potentials of the new RoRo network. Widodo, who likened himself to Duterte for being a mayor also a city in his country before becoming the president more than two years ago, underscored the importance of infrastructure development in the countryside. "This launch is happening at favorable time. Last year, trade between our two countries increased by more than 30 percent form the year before," he said in a speech. "I hope that this new RoRo service between Davao-General Santos and North Sulawesi represents new opportunities that will foster new business for both our peoples," added Widodo, who along with his wife, left Davao City after the launching of the ferry service. M/V Super Shuttle RoRo 12, operated by the Asian Marine Transport Corp. will provide a weekly shipping service to the route with a vessel capacity of 500 Twenty Foot Equivalent Units (TEUs). Opening of the route is a more cost and time efficient alternative to the usual Manila to Jakarta to Bitung route, which would take about three to five weeks of shipping time. Savings of up to $1,500 (P74,000) per TEU is estimated in using the route given its $700 (34,713) per TEU rate per 20 feet dry container as compared to using the Davao-General Santos to Manila to Manado via Jakarta route, which amounts to $2,200 (P109,098) per TEU. Goods from Mindanao shipped to Indonesia include animal feeds, fertilizer, construction materials, ice cream products, poultry, fresh fruits, and synthetics. Imports from Indonesia will be matured coconut, copra, corn, feed ingredients, lumber, cement, high value crops, vegetables, meat, peanuts, aqua products, charcoal, soya, coffee beans, and sugar.  (Celerina Monte/DMS)