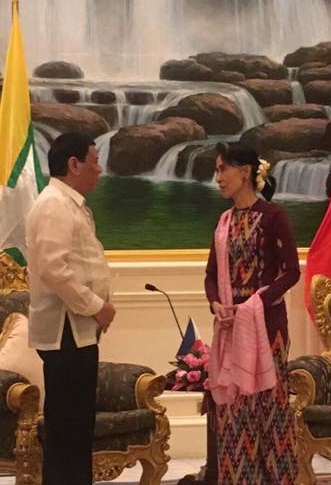 All the leaders of the Association of Southeast Asian Nations, except Myanmar, will attend the Summit on April 29 to be held in Manila, an official said on Monday. Myanmar has designated State Counsellor Aung San Suu Kyi as head of her country's delegation, said ASEAN National Organizing Committee Chairman Marciano Paynor Jr. said in an interview at the Kalayaan Hall in Malacanang during the ASEAN Digital Media Forum. "Myanmar head of state is not coming. But they have designated Aung San Suu Kyi as head of the delegation. So all the other heads of government are coming," he said, explaining that "traditionally"  Myanmar President U Htin Kyaw" does not attend multilateral meetings. "So they always assign somebody else," he said. This will be the first time Suu Kyi, a Peace Prize laureate, will visit the Philippines. But President Rodrigo Duterte and the Burmese democracy icon already met in Myanmar during the former's visit there last month. During their meeting, Duterte handed to Suu Kyi the Philippines' $300,000 contribution to humanitarian efforts to Rakhine State. (Celerina Monte/DMS)