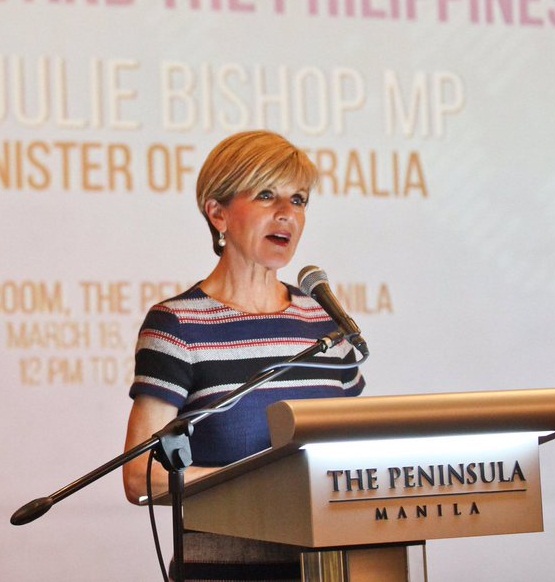 Visiting Australian Foreign Minister Julie Bishop urged on Thursday Southeast Asian countries, including the Philippines, to speak with "one voice" as she hoped the 2016 July arbitral ruling be the "basis" of the code of conduct in the South China Sea that the regional bloc is working on along with China. Speaking in a forum in Makati City, Bishop said the Philippines, as chair of the Association of Southeast Asian Nations (ASEAN) this year, could lead the region in speaking with one voice in "seeking on a particular stance." She said ASEAN could be a "powerful force" if it speaks with one voice. Saying Australia is not a claimant county in the disputed South China Sea, Bishop said that the award on the Philippines by the Permanent Court of Arbitration in July last year with regard to its petition against China's nine-dash line in the disputed waters "can be the basis of the code of conduct." ASEAN, along with China, is working on a draft framework on the COC in the South China Sea. According to Acting Foreign Affairs Secretary Enrique Manalo, the first draft of the framework has been completed. Asked on the statement of former Foreign Affairs Secretary Albert del Rosario, suggesting that the COC in the South China should be based on the PCA ruling, Manalo said, he was "not in a position yet" to say what could be the basis for the COC since the framework is still being prepared. He said they will be guided by elements, which could provide more cooperation in the South China Sea and those which help promote peaceful settlement and end tension in the area. China is not honoring the arbitral ruling. It has been claiming almost the entire South China Sea. Aside from the Philippines, the other claimant countries from ASEAN are Vietnam, Malaysia, and Brunei. Celerina Monte/DMS