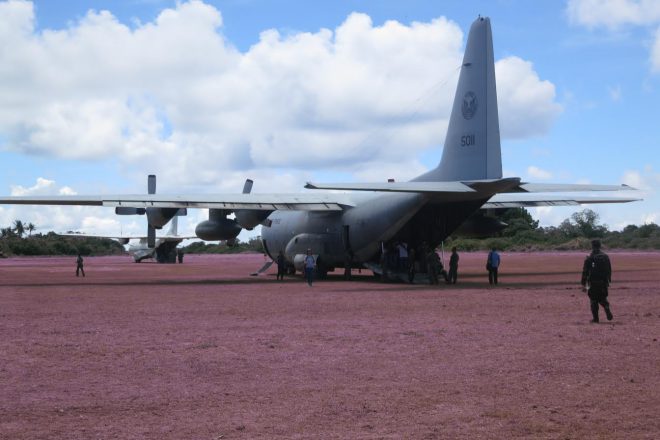 Pagasa Island, Palawan – Planes carrying Defense Secretary Delfin Lorenzana and the Armed Forces of the Philippines (AFP) Chief of Staff General Eduardo Ano on board were challenged several times by Chinese on Friday, a military spokesman said. “The aircraft were challenged as it made its pattern for landing (in Pagasa Island),” said Brig. Gen. Restituto Padilla. “The pilots reported they were once again challenged as they made their pattern for landing,” he added. “There were also challenges in the periphery of Subi Reef,” said Padilla. Lorenzana said the signals came from Subi Reef where he said the Chinese have a base and a radar system. “It came from their base in Subi which is 14 nautical miles from here (Pagasa). They have many facilities there. Their radar is located there,” said Lorenzana Padilla said like the previous challenge, the Chinese were informing the aircraft it is entering their territory. “The concept is you are entering Chinese territory, stay way to avoid miscalculation,” he said. “As before they were forewarned that they are entering the periphery of the Chinese installation and were told to keep away to avoid miscalculation,” Padilla added. Padilla was on board the C-295 aircraft with  Ano, other military officials and Palawan  government officials when they went to Pagasa Island from Palawan. Lorenzana said the C-130 aircraft that brought him in the island from Manila was challenged by the Chinese in the same area. “That’s their protocol. That is procedural. We also reply that we are flying over Philippine territory so that challenge is answerable and there is no untoward incident,” said Lorenzana. “That’s normal (challenges), everytime we went here for our resupply, they always challenge, and we always tell them also that we are flying over Philippine territory,” he added. The Philippine Air Force aircraft used by Lorenzana was also carrying military officials and journalists from Manila. The C-130 arrived in the Island at exactly 8 am. The challenge against the aircraft was being experienced before it landed in the airstrip of Pagasa Island. Lorenzana said it is the second time he visited the island while it is the first time for Ano. Other military officials who visited the island included Western Command Chief Lt. Gen. Raul Del Rosario, Army Chief Lt. Gen. Glorioso Miranda and Air Force Chief Lt. Gen. Edgard Fallorina. During their visit, military and defense officials boarded a mini-dump truck to inspect the island. The island was last visited by an AFP chief of staff on 2015, when General Gregorio Catapang went there. (Robina Asido/DMS)