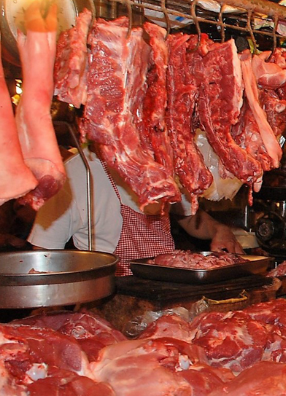 The Department of Agriculture approved on Wednesday importation of seven million kilos of pork to stop prices from rising further. In his Facebook post, Agriculture Secretary Emmanuel Pinol said President Rodrigo Duterte personally called his attention two weeks ago regarding rising prices of pork in the market. Pinol said he arranged meetings with hog raisers groups and appealed to control the price of live weight so pork prices will not rise. The hog raisers promised to help, he said. But Pinol said prices of pork continued to rise prompting him to call the technical team to assess the situation. After his meeting, he said, "As of 1pm today, the Dept. of Agriculture has decided to allow the importation of 7-million kilos of pork covered by MAV (minimum access volume) to address the uncontrolled increase in the price of pork in the market." Pinol said he sent this message to the hog raisers. The DA chief said he has to approve the recommendation of the technical team due to "seeming insincerity" of the hog raisers. "If you remember I made an appeal that the price of live weight be controlled so that I will not be unduly pressured by the consumers. It seems my appeal fell on deaf ears, hence this move to allow importation," he said. With the decision, he said this would mean that meat importers will be allowed to bring in seven million kilos of pork to stabilize the price in the market. Pinol said he informed Executive Secretary Salvador Medialdea of the decision to import pork. In another Facebook post, Pinol said Duterte approved the creation of a task group that will conduct an actual rice stock inventory and establish accurate baseline information. The Task Force Bigas (Rice) will be led by the DA and supported by other agencies like the Bureau of Customs, Bureau of Internal Revenue (BIR) and the Philippine Statistics Office. A Memorandum Order is expected to be signed by Executive Secretary Salvador Medialdea to operationalize Task Force Bigas, he said. "The Task Force is also expected to avert any attempt to hoard rice and create an artificial shortage following the announcement made by Pres. Duterte that no rice importation should be made during peak harvest season," he said. Pinol cited the statement of International Rice Research Institute (IRRI) economic analyst Samarendu Mohanty that the Philippines has an inventory of about 5-million metric tons of rice and a buffer stock supply good for 46 days. Pinol said the Task Force will conduct a nation-wide inventory of all rice stocks, including those which entered the country through the backdoor by a well-organised rice smuggling syndicate which receives the rice from other countries in the waters off Malaysia and transferred to small boats which bring the stocks to Zamboanga City and other small ports in the peninsula. "Grains warehouses are proposed to be opened and inspected in the process," he said. Last month, Duterte ordered the deferment of rice importation during peak harvest season to protect Filipino rice farmers. This was after he fired an undersecretary of the Office of the Cabinet Secretary for approving the importation of rice by private importers. (Celerina Monte/DMS)