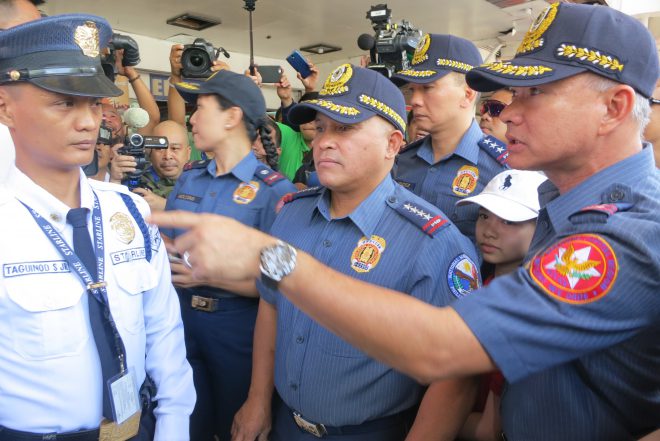 Philippine National Police Director General Ronald Dela Rosa led the inspection of the public transport terminals and church in Metro Manila on Tuesday as part of its security preparation for the Lenten break. Dela Rosa was accompanied by the director of the National Capital Police Region (NCRPO), Chief Supt. Oscar Albayalde, and Quezon City Police District head  Chief Superintendent Guillermo Eleazar. The first inspection was made at the Araneta-Cubao Bus terminal where Dela Rosa even boarded a bus going to Bicol province. After the inspection, Dela Rosa observed anti-terror simulation exercises performed by QCPD and EOD team near the area. Chief Inspector Titoy Jay Cuden, QCPD Public Information Officer, said the drill was conducted to determine preparedness for local or foreign terror attacks, as many travellers are expected to visit their provinces this Holy Week. The scenario of the simulation includes response and disruption of a bomb left unattended at the compartment of a bus at the parking area beside the Araneta bus terminal. During the drill, bomb experts conducted Render Safe Procedures (RSP) which included the successful on-site detonation of the IED using the MK3 Caliber ICOR Robot and Disruptor Water Cannon. “The PNP’s MK3 CALIBER is a medium-sized robot designed for remote handling and Render Safe Procedures of IEDs and other explosive ordnances, reconnaissance missions, two-way communication and deliver and retrieval tasks,” Cuden said. “The MK3 is uniquely equipped with two robotic arms (a heavy-duty robotic claw and twin-disruptor turret), as well as six color cameras which help facilitate all kinds of surveillance missions,” he added. In an ambush interview after the bomb drill, Dela Rosa emphasized the importance of yesterday’s activity. “To increase public awareness, especially this season when a lot were travelling, people are rocking to the terminals and most likely these public utility conveyances were the usual target by the terror attacks so if we will be aware at the same time on the part of our EOD, SOCO all of our responding security personnel will be able to rehearse their role in this kind of crisis or situation,” he said. “I’m satisfied they know their job very well… they are expert on their field that is why we are confident that if there is this kind of situation we properly address by our responding policemen,” he added. Dela Rosa said he is also set to conduct inspection in Metro Rail Transit (MRT) Line 3, airport, seaport and churches. Robina Asido/DMS