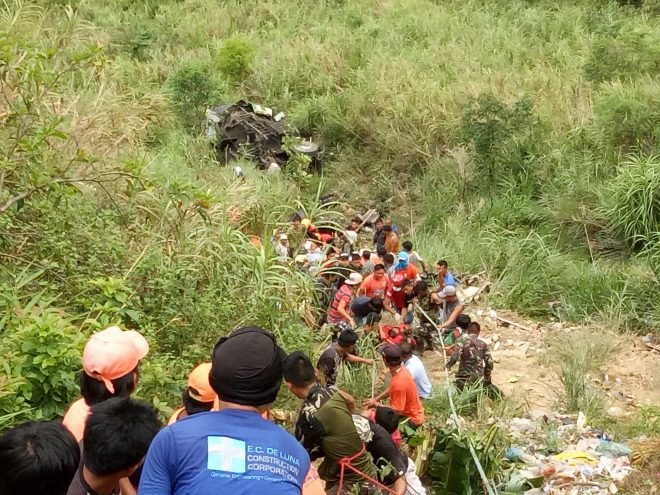 Thirty-one persons have died Tuesday’s mishap where a bus fell into a ravine in a town in Nueva Ecija, with four of the 46 injured in critical condition, a police official said Wednesday. Senior Supt. Antonio Yarra, Nueva Ecija police director, said the four critically wounded persons were in critical condition at the Veterans Hospital in Nueva  Vizcaya, Thirty wounded were brought to the Veterans Hospital and 16 were sent to the Nueva Vizcaya Provincial hospital. Authorities said the bus, which came from Ilocos Sur, fell into a ravine around 100-120 feet deep in Carranglan town, Nueva Ecija. “Our investigator is returning to the scene together with officials from the Provincial Disaster Risk Reduction Management Council at the Land Transport Regulatory Board to see if there are more casualties,” said Yarra. Yarra said they are trying to locate Juan Leonardo Patulot, operator of Leomarick Transport which owns the bus. Yarra said authorities are experiencing difficulties in identifying the body of the victims as they do not have identification cards. He noted police are still trying to find out what caused the accident but Yarra mentioned t some witnesses said the right wheel in front of the bus exploded, causing the vehicle to plunge into a ravine. “What is surprising is there was a concrete barrier here in the right side of the highway. It just happened that the bus fell in the opening (an area where there was no concrete barrier),” Yarra said. Yarra also mentioned there are survivors who the driver shouted he lost his control over the vehicle because of brake problems before he jumped out of the window. (Robina Asido/DMS)