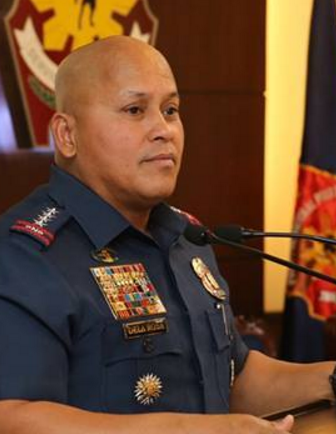 The head of the Philippine National Police (PNP) expressed belief the local terrorist Maute Group “has already established presence in Metro Manila”. PNP Director General Ronald Dela Rosa made his statement when they presented one of the suspects on the bombing attempt in US Embassy last November 2016. “We are yet to uncover the circumstances surrounding this incident involving the Lanao-based Maute Group, but this discovery leads us to believe that the Maute Group has already established presence in Metro Manila. As to what extent, that is the subject of our follow up investigation and operations,” he said. Chief Superintendent Oscar Albayalde, National Capital Region Police Office Chief said the suspect identified as Nasip Ibrahim, 35, was arrested in Barangay Culiat, Quezon City around 9:15 pm on Monday. Ibrahim was reportedly part of a group which attempted to bomb the US Embassy last November. He said Ibrahim, a native of Marawi City resident 31 Libyan Street, Salaam compound, Brgy. Culiat, Quezon City is an owner of sari sari store, a ticketing office and a money remittance outlet. Chief Superintendent Guillermo Lorenzo Eleazar, Quezon City Police District Director, said the joint operatives from police and the military were supposed to serve a warrant of arrest against certain Jamil Baja Tawil, a suspected ally of the Maute Group, wanted for illegal possession of firearms, believed to be coddled by Nasip Sarip alias Nasip Ibrahim and sheltered in his residence. “The wanted Tawil could not be found, so the raiders interviewed Nasip, the suspected coddler in his sari-sari store for Nasip to divulge the location of Tawil, which Nasip would not, and who kept evading the point. In the course of this interview, a caliber .45 pistol was seen in plain view atop a computer printer under a table. He was immediately arrested after he failed to present pertinent documents,” he said. “Barangay officials and Maranao tribal leaders were then summoned and requested to witness the seizure of the pistol and a further search of the store,” he added. During the search, the government troops also recovered one Colt caliber .45 pistol with four live ammunition, one KG 9MM machine pistol with two magazines loaded with 34 live ammunition, one 60mm mortar shell with detonating device, another caliber .45 pistol loaded with six live ammunition and seven heat-sealed transparent plastic sachets of shabu. Eleazar said Ibrahim drove the vehicle used during the attempted attack on the US embassy last November 28, 2016, when a street sweeper found an improvised explosive device (IED) that failed to explode. “They had driven the vehicle to Metro Manila all the way from Mindanao, and a few days before the attempt at the US embassy Nasip met with three Muslim plotters, Isnadie Ibrahim alyas Bro Akh alyas Inspire, Nasip’s uncle, also the sub-leader who planned the IED attack in Metro Manila,” he said. “Accordingly, Nasip was the one who facilitated the accommodation of the group, in the Park Villa along Quezon Avenue Quezon City, where they stayed for two nights,” he added. After the failed US embassy attack, the military and police conducted a joint intelligence build up and counter terrorism which resulted in the arrest of four suspects identified as Jiaher Guinar, Rayson Kilala, Mohammad Jumao-As alias Modie and Elmer Romero alias Jamal. Albayalde said a certain Yusof Macoto an Imam in Tejeros Mosque in Tanza, Cavite, is said to be the mastermind of the foiled bombing plot, and is believed to be facilitating Jihad teachings in the mosque. “It is possible that they already have a cell here in Metro Manila, like what the district director, they have cell leader here one Yusof Macoto, he is being hunt down allegedly hiding in Tanza, Cavite,” he said. Amid the reported presence of the local terrorist group in Metro Manila, Dela Rosa calls the public not to worry and to be vigilant. “I do not want to sound alarmist or cause panic, but prudence, it has been said, is the better part of valor. I therefore, urge our people to remain calm yet alert and vigilant of the presence of threat groups in our midst,” he said. Despite the admission of the PNP, the Armed Forces of the Philippines deny monitoring presence of Maute Group in the metropolis. “Well I have consulted our people and staff from the intelligence community and the information they provided was that so far, in so far as the AFP is concerned, we have not monitor that there are members of Maute Group here in Metro Manila,” said Marine Col. Edgard Arevalo, AFP Public Information Office chief. “Now with regard to the PNP statement as you were saying we would like to defer on what is the basis of their report or the statement that there are Maute here in Metro Manila,” Arevalo added. In a statement, Brig. Gen. Restituto Padilla, spokesman of the Armed Forces of the Philippines, said the AFP is coordinating with the PNP on the matter. “Be assured that the AFP is always prepared to assist in the event of any contingency. For the AFP, it is not a question of "IF" (any threats exist) but rather of "WHEN" these threats become active. Hence, the need to be prepared at all times,” he said. (Robina Asido/DMS)