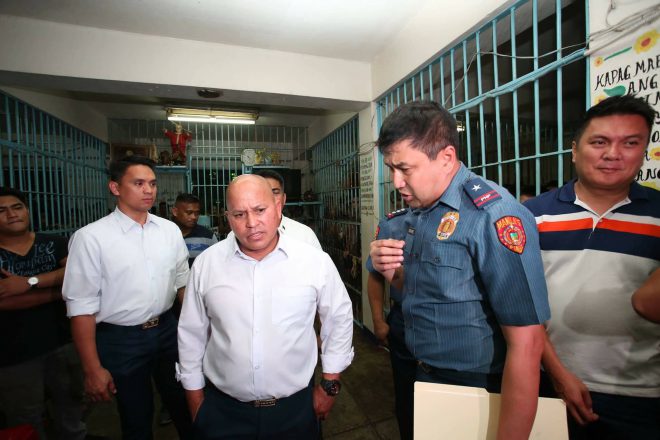 Dela Rosa challenges CHR to inspect police stations daily, not when there is event

Amid the discovery of alleged secret jail in a police station in Tondo last Thursday, Philippine National Police (PNP) Director General Ronald Dela Rosa challenged the Commission on Human Rights to conduct daily inspection of their police stations. Dela Rosa said the human rights group should not inspect only because there is an on-going international event. “As long as the inmates were not harmed and not being extorted that is fine with me,” Dela Rosa said. “I challenged those in human rights, you want to do inspection, and you should conduct inspection every day, and not just do inspection to show the people that you will have your inspection now that there is an ASEAN summit,” he added. Dela Rosa, in an interview aired on TV, said he asked the detainees if they were being extorted. He said the detainees denied it. In a text message to the Daily Manila Shimbun, Jacqueline de Guia, CHR spokesperson  denies the accusation of Dela Rosa, saying the inspection that made was “impartial and non-partisan.” “The CHR as part of the government supports the ASEAN and the government in hosting this event. It categorically denies any accusation that the investigation was done deliberately to coincide with the event. It is impartial and non-partisan,” she said. “It is unfortunate that an information was received beforehand prior to the investigation which prompted the CHR to do its job as mandated by the constitution and act on the matter immediately as required by RA 9745 or the Anti-Torture Act,” she added. De Guia said the “CHR cannot sit idly nor ignore any information which may involve a serious human rights violation.” The CHR discovered the alleged secret cell when they conducted an unannounced inspection at the Manila Police District Station 1 in Tondo. Last Friday, NCRPO Regional Director Oscar Albayalde ordered the administrative relief of the station commander and the station’s drug enforcement unit to pave the way for a impartial investigation. (Robina Asido/DMS)