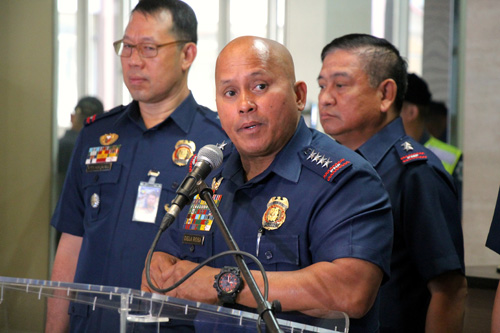 Philippine National Police (PNP) Director General Ronald Dela Rosa defended the  Manila Police District chief after the justice department ordered the National Bureau of Investigation to investigate the continued detention of  four drug suspects despite an order for their release from the city prosecutor. “It is not fair for the PNP if you will only listen to the other side. Please also hear the side of the PNP and to give you the right side and correct side of the PNP. I asked General  Jigs Coronel because his personnel were involved there,” he said. “He gave a good explanation. There is no bullet planting that happened everything was covered by search warrant,” he added. Dela Rosa explained if the policemen intended to get money, it should not be recovered. “If they have bad intention why they will plant bullets? To get money? But there is one million pesos plus recovered and it was included in the exhibit as evidence. If you only want money they can steal the money there… so that was well explained by General Coronel yesterday,” Dela Rosa said. Justice Secretary Vitaliano Aguirre II ordered the National Bureau of Investigation to investigate the case of four drug suspects who remained detained in a Manila jail despite a dismissal order by the prosecutor. “All those responsible will be held accountable,” Aguirre said in a media briefing Thursday.. Api Ang, 61, and three others were arrested by Manila policemen in a raid at his hotel last Nov. 21, 2016 where authorities confiscated drugs, paraphernalia, and ammunition. The case was dismissed by the City Prosecution Office of Manila and subjected to automatic review before the Office of the Secretary of Justice. But they remained in detention. Ang died last April. The three other inmates were released on Thursday. Aguirre said in January, he released an order saying suspects must be released after the prosecutor has dismissed their cases. Aguirre directed Manila City Prosecutor Edward Togonon to explain why this happened. He said Ang’s continued detention might be due to confusion over previous issuances of the past administration. (Robina Asido/DMS)