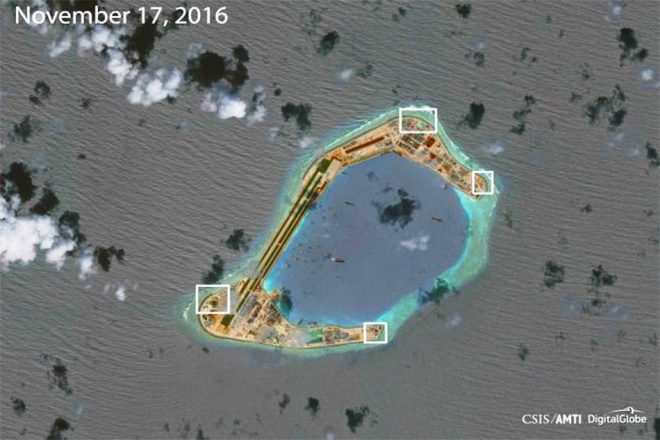 The Department of Foreign Affairs is checking on reports that China is planning to build structures in Philippine-claimed Scarborough Shoal in the South China Sea, Malacanang said on Tuesday. "The DFA is in the process of verifying alleged announcements of proposals to build structures in WPS (West Philippine Sea), since these statements do not reflect the official position of PROC (People's Republic of China)," said Presidential Spokesperson Ernesto Abella in a text message to reporters. Meanwhile, Justice Secretary Vitaliano Aguirre II said the Philippine is preparing another protest against China over the latter's reported plan to install a radar station in Scarborough Shoal. "There will be (a protest to be filed). A stronger one will be filed," Aguirre said. Aguirre said President Rodrigo Duterte will not “let go of (Scarborough Shoal).". "As a matter of fact, we are strengthening the relationship with the US," Aguirre said. The filing of the protest was among the five-point strategy suggested by Carpio on how the government could respondent to China's reported plan in Panatag shoal. There were reports that Sansha City, which China created to strengthen its claim over the entire South China Sea, reportedly was planning to build an environmental monitoring station on Scarborough Shoal. Before President Rodrigo Duterte left for Myanmar last Sunday, he said he could not stop China if it would construct on Scarborough Shoal because the Philippines has no capability to declare war against Beijing. Abella clarified Duterte has repeatedly asserted that the Philippines is not giving up its claims and entitlements over the disputed area. "He (Duterte) has said time and again that he will defend and protect the interests of the Filipino people, and will take necessary action at a time most fitting and advantageous to us," he said. Supreme Court Associate Justice Antonio Carpio has cautioned Duterte from making statements which could expressly or impliedly waives Philippine sovereignty in the South China Sea. Carpio advised Duterte to "avoid any act, statement or declaration that expressly or impliedly waives Philippine sovereignty to any Philippine territory in the West Philippine Sea." In 2012, China occupied Scarborough Shoal after a tense standoff between Chinese and Filipino vessels. China is denying Filipino fishermen access to its rich fishing stock. The PCA has ruled in 2015 that Panatag Shoal is a “common fishing ground” of fishermen not only from the Philippines but also from China and other neighboring countries and nullified China's nine-dash claim over South China Sea. China has allowed Filipinos to fish in the fringe of shoal late last year. (Celerina Monte/DMS)