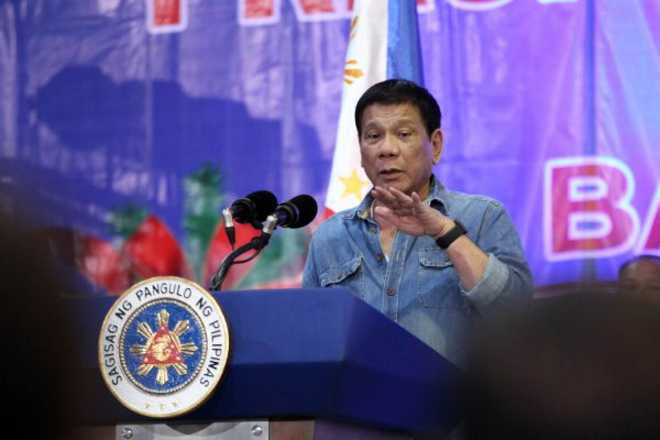 President Rodrigo Duterte has said that the estimated four million drug users in the country could already be considered as "slaves."

In a speech during the Christmas party of the village officials in Davao City on Tuesday night, the Chief Executive also cautioned the public about religion, referring to the Catholic Church, which has raised concern over the increasing number of alleged extrajudicial killings of drug suspects in the country.

"Let me spell out to all, we estimate in government that the (number of) drug addicts has reached four million. These four million addicts, if religious (critics and) America are listening, they are already slaves of people who sell drugs," he said.

Duterte likened the religious critics to America for being "hypocrites."

He said the Church was not doing anything to help in the campaign against illegal drugs, but it is only good in collecting "huge" amount of money from the people.

But he added that he knew some "good" priests because they are his friends. "I know them to be good and humble," he said.

Duterte said the term extrajudicial killing "is not acceptable to me."

But if those involved in illegal drugs are killing each other, the government would not bother to stop them.

"Allow them to kill each other," he said.

Over 5,000 drug suspects have already been killed since Duterte assumed post on June 30 and declared war against illegal drugs.

The United States, along with the United Nations, European Union and the local and international human rights groups, have been criticizing the Duterte government for the alleged summary killings.

Duterte qualified that his criticisms against the United States were directed only to the administration of outgoing President Barack Obama, who also raised concern over the extrajudicial killings.

"I'm not referring to the good people of America. I'm cricizing the Obama administration for its shortsightedness and for its hyprocrisy, including the human rights (groups)," he said. Celerina del Mundo-Monte