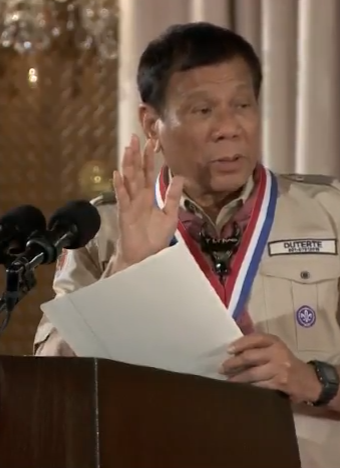 Duterte admits talks with NDF in the Netherlands not making progress

President Rodrigo Duterte admitted on Monday that the peace talks in the Netherlands between the government and the communist National Democratic Front  NDF) have not been making any progress because of the conditions he set. In a speech before children who are members of the Boy Scouts of the Philippines in Malacanang, Duterte said the country is facing many problems, including the communist insurgency. "We're facing the NPAs (New People's Army). We're having talks in Netherlands. They have not made any progress because I have some conditions to impose before we go back (to the negotiating table)," he said. Duterte, on Sunday, made his final directives to the government peace panel members who were in the Netherlands for the fourth round of talks. The conditions he set for the forging of a bilateral truce agreement with the Communist Party of the Philippines-New People’s Army-NDF include clear parameter or terms of reference for the ceasefire; the government shall not recognize any territorial claims of the rebels; the leftist group should cease the collection of revolutionary tax and the conduct of extortion and extraction and arson; and it shall release all prisoners. The opening of the formal peace talks on Sunday was delayed as it took place only on Monday. The NDF was claiming the delay was due to conditions set by Duterte, while Presidential Adviser on the Peace Process Jesus Dureza denied Duterte was the reason. In his opening statement, peace panel head Labor Secretary Silvestre Bello III welcomed the NDF to undertake a forging in this round of talks of an agreement on joint interim ceasefire that will accompany the peace negotiations throughout. "As you will agree with me, the forging of the ceasefire agreement is not about 'giving in' or 'giving up', it is about 'giving all' for peace. This is the covenant of President Duterte to our people. And as peace workers ourselves, we should be one with him," he said. Duterte said if the talks with the communist rebels would fail, he would not hesitate to use the air assets of the military to go after them. "I will utilize the air assets. Before it was not really a popular, well, choice, option. But this time, if we don't agree, I will not hesitate to use the full power of the state," Duterte stressed. The government and the NDF peace panels are set to discuss also socio-economic reforms that will address the root cause of armed conflict. Duterte said his administration is also talking with the Muslim insurgents, the Moro Islamic Liberation Front, and the group of Moro National Liberation Front under Nur Misuari. He reiterated his government would not talk with the terrorist groups. Duterte expressed hope Abu Sayyaf leader Isnilon Hapilon, who is the anointed leader of the Islamic State terror group, who was badly hurt in the military operations months ago in Central Mindanao, is died. "I ordered the bombing of his housetwo months ago. We have not heard from him. I suppose he might be dead. That is their style, they will disappear then suddenly they will resurface. I hope we got him," he said. (Celerina Monte/DMS)