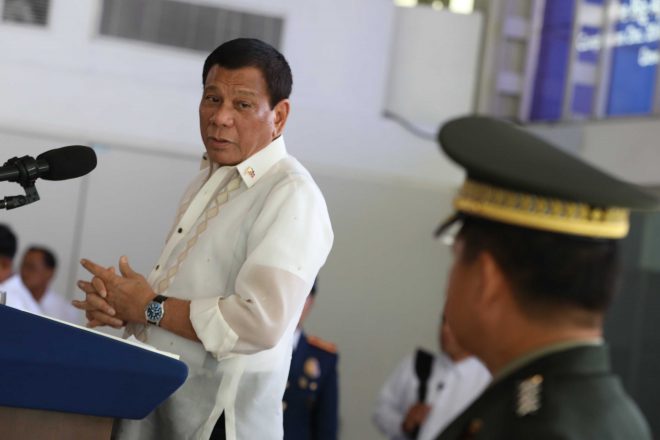 President Rodrigo Duterte appointed Senator Alan Peter Cayetano, his defeated running mate in the 2016 national elections, as the new secretary of the Department of Foreign Affairs. In a press conference before leaving for Cambodia at the Ninoy Aquino International Airport on Wednesday, Duterte said he would appoint Armed Forces of the Philippines chief of staff General Eduardo Ano as head of the Department of Interior and Local Government. "Here at DFA, I remember I signed an appointment paper just before I left my room and I saw the name of Senator Cayetano at DFA," he said. Shortly after he won the presidential elections last year, Duterte said he would appoint Cayetano, his defeated vice presidential running mate, as his DFA chief. Duterte had to wait for one year before he could formally appoint Cayetano. Under the law, the defeated candidates could only be appointed to a government post after one year. The one-year ban has expired. Cayetano replaced former Foreign Affairs Secretary Perfecto Yasay Jr., whose appointment was rejected by the Commission on Appointments in March for allegedly lying regarding his American citizenship. Duterte appointed Foreign Affairs Undersecretary Enrique Manalo as acting DFA chief. Since Duterte assumed post, everytime he travels abroad, Cayetano accompanies him. With Cayetano's appointment, he is deemed resigned as a senator. In the same press conference, Duterte said Ano would be the incoming DILG secretary succeeding Ismael Sueno whom he fired in early April for alleged corruption. DILG Undersecretary Catalino Cuy was appointed as the officer-in-charge. With Duterte's announcement of Ano this ended speculations that he would appoint former Senator Ferdinand Marcos Jr., who finished second in the vice presidential race. Duterte's announcement of Ano being the incoming DILG secretary was done unceremoniously. He asked the military general to come forward when a reporter inquired if he would appoint new officials to the government after the one-year ban on  losing candidates expired. "May I call upon the chief of staff. General Ano, can you come forward and be counted as one of the Filipinos...you are now facing the next DILG secretary," he said. But he said Ano would complete his service in the military until his retirement in October this year before assuming the DILG post. "I want him to complete because there are projects which he has to (finish)...at this time, you cannot just pull out somebody in the Armed Forces, especially those who tasked of programming what will happen next and the remedies that we are supposed to be ready," he said. The military is waging an all out war against the terrorists, including the Abu Sayyaf. Duterte said he has to choose a military man to head the DILG because "I have a problem with the police." The DILG has supervision over the Philippine National Police. As he was on his way to the airport, Duterte said he received a spot report regarding kidnapping involving four policemen. "These policemen are really son of a bitch. So you need one, somebody who knows the police by the fingertips of his hand...and then we have a problem with terrorism. What looms very big ahead is the IS. They are coming in. We have firefight in Mindanao now," he explained. (Celerina Monte/DMS)