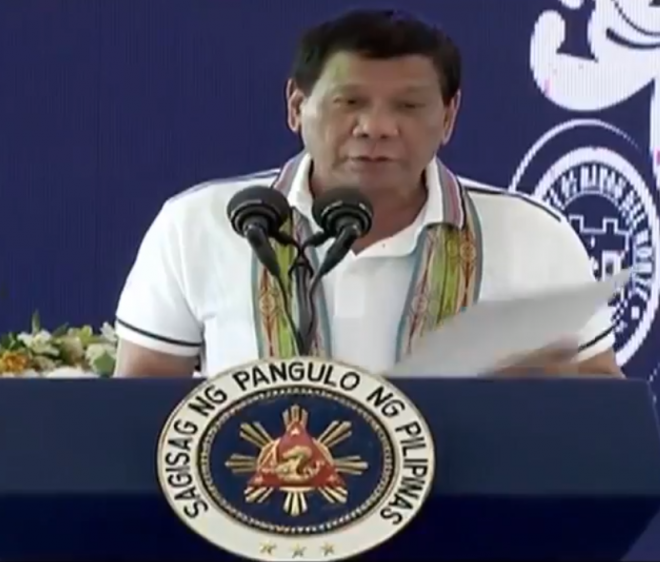 Duterte asks communists if fighting with government can cease

President Rodrigo Duterte asked the communists if they can stop fighting with the government forces amid the ongoing armed conflict in Marawi City. "To the communists who are listening now... you know we can talk but do not give me a double face...we used to talk. We were friends. But that was during the time when I was mayor. I was not then burdened with the responsibility of running the country but now the situation is different," Duterte said during his speech at the 50th founding anniversary celebration of the Davao del Norte in Tagum City on Saturday. "If you fight against my police and shoot my soldier, we will be enemies. If we fire at each other, then we will fight, but can we just stop fighting for a while? Because your leaders in Europe said there will be ceasefire. At first your leader said that you are to engage government forces and then they realized now at the very late day… there will never be social, political and economic space for you communists," Duterte added. Duterte expressed his feelings about the soldiers and policemen who were killed during the ongoing battle against the terrorist group in Marawi City. "I am today with a heavy heart, by the time I reach home... the papers are there... with the  narratives of today's events that happening in Marawi and I get to read  Its so many soldiers and police are dying... it’s almost like a kin... my only consoling issue there is that I have to do it  because…it is my constitutional duty to preserve and defend the Filipino people," he said. "If there are casualties, specially in soldiers, if there is one person in this republic in this country who is really carrying a heavy heart. It’s me because I ordered the AFP and the police to go there and fight and perhaps to die... So everytime I read the casualties it seems that it’s very unsettling I don’t know what should I do but I can't stop the fighting because I will never, never, never, compromise with the terrorist...," he added. Robina Asido/DMS