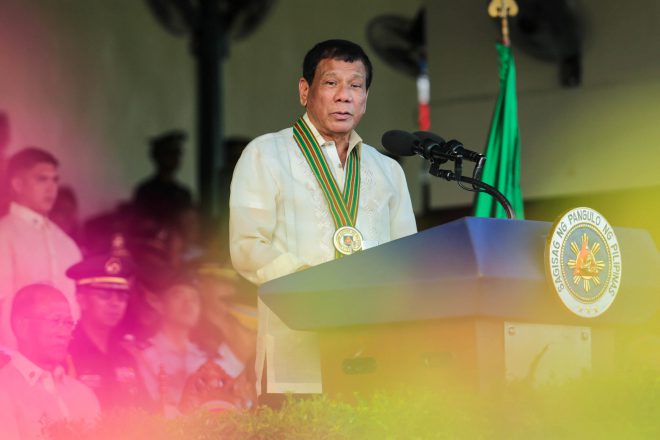 President Rodrigo Duterte said on Tuesday government housing projects in Bulacan supposedly for the police and military would be awarded to urban poor who illegally occupied them. In a speech during the 120th founding anniversary of the Philippine Army in Taguig City, Duterte said he wants to avoid further trouble between the authorities and poor Filipinos. "Let us not wage a fight against our own people. In the first place, they are poor (so) let's just try to understand them," Duterte told the soldiers, who were among the supposed beneficiary of almost 6,000 housing units in Bulacan. But these were occupied by the members of Kadamay (Kalipunan ng Damayang Mahihirap), a militant urban poor organization. "Their only sin is just really they are poor like us," Duterte said. Kadamay members started occupying the houses built by the National Housing Authority early March. They claimed that the housing units, which were for police and the military, have remained idle and yet many poor Filipinos have no shelters. The housing projects were built during the previous administration. Apparently to console policemen and soldiers who would be deprived of the housing units, Duterte said his administration would build new and better houses until December this year. "Do not be offended. Take it with an open mind," Duterte said. "I promise you, I will look for another land nearby or adjacent or maybe contiguous to that area there and I will build better houses. Those which have water and electricity when you enter...I will give you better, more expensive, more comfortable and bigger (houses)," he said. But he warned Kadamay members not to create trouble with families of police and the military who have been occupying the housing projects, otherwise, they would be evicted. "Do not create trouble, avoid chaos, and we will try to solve what ails this country," Duterte said. He added families of the men in uniform who are occupying the housing units would be transferred to the new housing project. He said he would personally supervise construction of the new project. "And hopefully by December, let us all pray, that everything goes well and you can transfer to the new house," Duterte said. Kadamay welcomed Duterte's pronouncement, which according to the group was "recognizing the legitimacy of the occupation in Bulacan." “This is a welcome development. The NHA and other shelter agencies should take this as a cue to overhaul the unjust housing policies that have plagued the poor for decades. Idle homes should be awarded to the homeless as soon as possible and the NHA should work towards catering to the basic rights of the poorest in the country,” said Gloria Arellano, Kadamay chairperson, in a statement. (Celerina Monte/DMS)