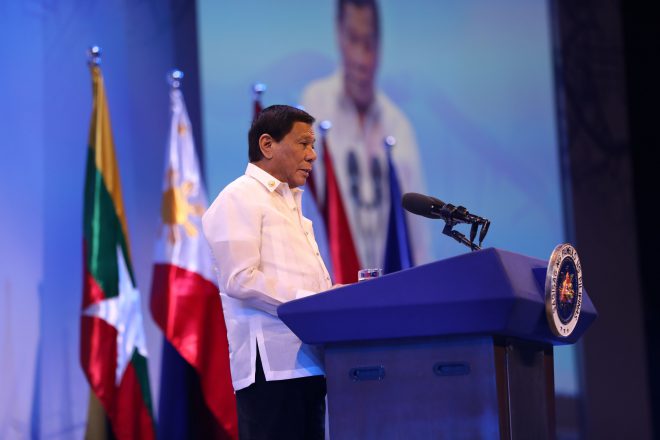 President Rodrigo Duterte underscored on Saturday the principle of non-intereference among sovereign states as he spoke at the opening ceremony of the 30th Association of Southeast Asian Nations (ASEAN) in Pasay City. Duterte's call for non-interference was apparently directed towards the United States and the European Union, both dialogue partners of the ASEAN. "This year, we are commemorating milestones with four of our dialogue partners – the 40th anniversary of dialogue relations with Canada, the European [Union], and the United States of America, and the 25th anniversary of relations with India. We are also commemorating the 20th anniversary of the ASEAN Plus Three," Duterte said. "These are relations that are valued. But they can be much more valuable and stronger if we learn to respect each other’s independence and treat each other as sovereign equals." The US and EU have raised concern over the bloody war against illegal drugs by the Duterte administration. A Filipino lawyer has filed a complaint before the International Criminal Court against Duterte for the alleged crime against humanity due to thousands of people killed in the government's war on drugs. Duterte, who is this year's chairman of ASEAN, said the regional bloc's engagement with dialogue partners allowed them to set the table for meaningful discussions on maintaining peace and stability, the pursuit of development goals, the peaceful resolution of disputes, and the promotion of people's welfare. But he reiterated, "relations bear fruit when they are based on mutual respect and benefit." "Dialogue relations can be made more productive and constructive if the valued principle of non-interference in the internal affairs of ASEAN Member States is observed," he said. Duterte said relations remain solid if all stakeholders learn to respect and value the peaceful resolution of disputes. "In an era where there can be much uncertainty, we must faithfully adhere to the supremacy of the law and rely on the primacy of rules as responsible members of the international community," he said. In the same speech, Duterte, who has been waging war against illegal drugs, stressed the need for a drug-free region. "We must also be resolute in realizing a drug-free ASEAN. The scourge of illegal drugs threatens our gains in community-building. I have seen how illegal drugs have ended the hopes, dreams, future and even lives of countless people, especially the youth," he said. Duterte said the illegal drug trade apparatus is massive, "but it is not impregnable." "With political will and cooperation, it can be dismantled, it can be destroyed before it destroys our societies," he said. The Filipino leader also cited the importance of joint efforts in eliminating security threats, which affect regional growth and development. "Piracy and armed robbery against ships disrupt the stability of regional and global commerce. Terrorism and violent extremism have brought the reality of attacks right on our shores and at our doorsteps," he said. "Eternal vigilance is the price that we must pay to keep our citizens safe. We can only achieve this through advancing cooperation at the bilateral, regional, and multilateral levels." The Philippines has been waging war against local terrorists, such as the Abu Sayyaf Group and the Maute Group in southern Philippines. (Celerina Monte/DMS)