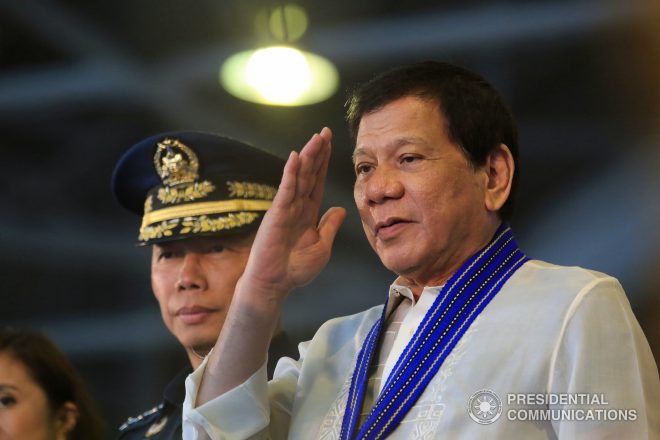 President Rodrigo Duterte underscored on Tuesday the "crucial role" of the Philippine Air Force in preserving the nation and in efforts to retake Marawi City from the Islamic State-linked Maute Terror Group. In a speech during the 70th anniversary of PAF in Clark Air Base, Duterte cited the PAF’s "intensified aerial reconnaissance missions and the maritime patrols" over the West Philippine Sea and the Benham Rise, saying they "are testament to our dedication to protect our waters from external threats." PAF has also been tapped to augment internal security operations by providing air support to the ground forces and assisting the law enforcement agencies in the surveillance and intelligence gathering operations. "Proving its capability on the ground, the Philippine Air Force has joined almost two thousand counter-insurgency and law enforcement operations, five of which contributing to our ongoing war against illegal drugs and loose firearms," Duterte said. "The Philippine Air Force is also playing a crucial role in our efforts to retake Marawi City from the clutches of the ISIS-inspired terrorists," he added. But 10 soldiers were killed and seven others were injured in military airstrikes supposedly targeting the terrorists in Marawi in late May. Duterte said PAF deployed more than 40 of its air assets and more than 400 Air Force officers and personnel, and several are involved in ground operations. When the government undertakes rehabilitation and reconstruction of Marawi, he said the Air Force will take an active role in the rebuilding of the city and uplifting the spirit of those affected by the conflict. He promised to further modernize the PAF by procuring additional attack and combat utility vehicles and unmanned aerial vehicles to complement its air assets. Duterte only read the prepared speech, which was short compared to his previous speeches, because he did not want the soldiers to continue to be wet due to rain. (Celerina Monte/DMS)