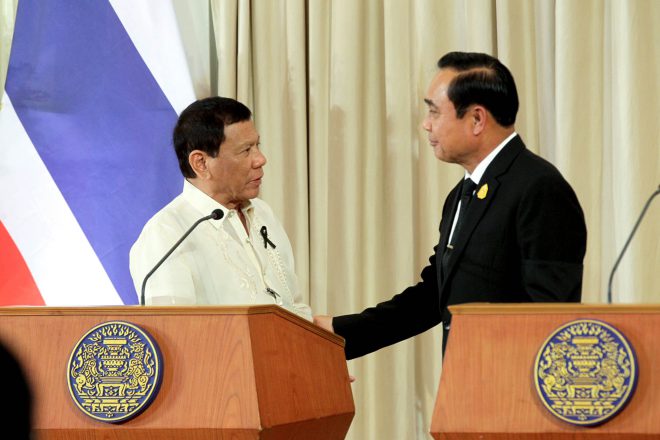 President Rodrigo Duterte underscored on Tuesday the need to complete the framework of the Code of Conduct in South China Sea within the year. Duterte, who is in Thailand for an official visit, said he and Thai Prime Minister Prayut Chan-o-cha in their bilateral meeting, stressed the need to maintain peace and stability in the region, including the South China Sea. "We recognize respect for freedom of navigation and overflight in the South China Sea is in the interest of all countries within and outside the region," Duterte said in a joint statement. "In this regard, we'd like to emphasize the need for the full and effective implementation of the Declaration of Conduct of Parties in the South China Sea and express determination to complete the framework of the Code of Conduct in 2017," Duterte said. The member countries of the Association of Southeast Asian Nations and China have been working on a framework for a COC in the disputed waters. China has been claiming almost the entire South China Sea. Among the ASEAN members, which have also claim in the area are the Philippines, Vietnam, Malaysia, and Brunei. Prior to the joint statement, the two leaders witnessed the signing of agreements and cooperation between the two countries. The signed documents include agreement for cooperation in the field of Science and Technology; implementing program on Tourism Cooperation 2017-2022; and implementing arrangement on Specific Areas of Cooperation on swamp and dairy buffalo production. Duterte's trip to Thailand completed his visits to all nine other members of ASEAN. In all his trips, Duterte sought for their full support for the Philippine ASEAN chairmanship for this year. (Celerina Monte/DMS)