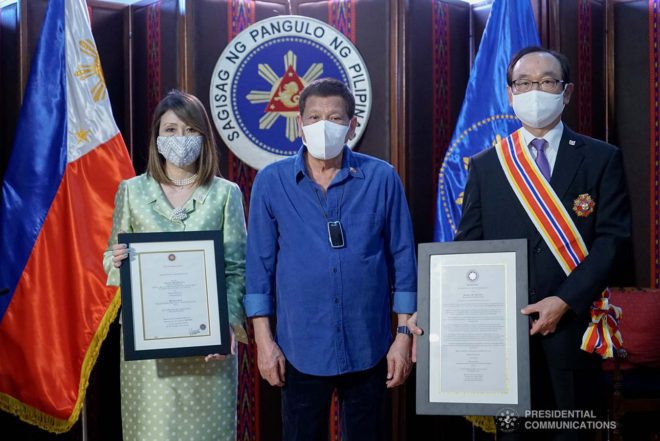 President Rodrigo Duterte has conferred an Order of Sikatuna, with the rank of Datu (Grand Cross), Gold Distinction to outgoing Japanese Ambassador to the Philippines Haneda Koji.

Haneda made a farewell call on Duterte on Tuesday, November 10.

"The President thanked Ambassador Haneda for his valuable contribution in strengthening and deepening the Strategic Partnership and overall bilateral relations between the Philippines and Japan since he assumed post in 2017," said the Office of Presidential Assistant on Foreign Affairs (OPAFA) in a statement released on Wednesday.

It said Duterte conveyed his appreciation for Japan's support in the Philippines' fight against coronavirus pandemic, through aid in emergency response and economic recovery efforts, and the Philippines' inclusion in the clinical trials of the anti-COVID-19 drug Avigan.

Quoting Haneda, OPAFA said he reaffirmed the value of the Philippine-Japan strategic partnership, while "noting the gains made in stronger cooperation, particularly in infrastructure, maritime domain awareness, countryside development and the peace process in Mindanao."

Haneda also thanked Duterte for the Sikatuna award given to him and vowed to be always a "true friend of the Philippines," OPAFA said.

Duterte undertook four official visits to Japan since 2016, while former Japanese Prime Minister Shinzo Abe visited the Philippines twice in 2017. Abe was also the first head of state to visit the country after Duterte assumed office in 2016.

"Japan remains a major partner of the administration's Build, Build, Build program and a key supporter of the Mindanao peace process, ongoing transition to the Bangsamoro Autonomous Region in Muslim Mindanao, and rehabilitation of Marawi City," it said. Celerina Monte/DMS