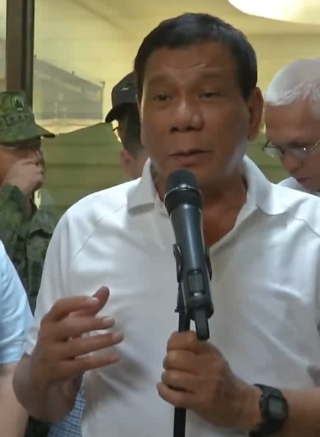 President Rodrigo Duterte is mulling to arm the civilians in Bohol province after the deadly clash between the government troops and the terrorist Abu Sayyaf on April 11. In an interview with reporters in Bohol, Duterte said he was offering P1-million reward for the arrest, whether dead or alive, of each Abu Sayyaf member who evaded the pursuing security forces in the province. There are around six Abu Sayyaf who are still at large. "Well, I intend to also arm the civilians," he said, adding that if they kill a bandit, they just have to report to the police. "You just go to the police and make the report and state (the) truth. There's no problem. I will take care of you and pardon you," Duterte said. He said government forces were pursuing the Abu Sayyaf members who were among those who landed in the island province of Bohol. "My order to the police and to all, and even to the civilians wherein they should do fight and kill. My order is dead or alive. That's why the six (Abu Sayyaf members), may be scouring the safety nets where they can land. I have P1 million offer per person," he said. He said his tip to the informants, "give to the police and also to military (the information of the bandits' whereabouts), no question asked. We'll not even give your names. Just inform where they are, then the government will take care of them." According to the military, the bandits sailed to Bohol from Sulu in Mindanao to kidnap foreign tourists. But government security forces thwarted the supposed attack in a firefight. Four government troopers and six suspected Abu Sayyaf members, including a sub-leader, were killed in the encounter in Inabanga, Bohol. (Celerina Monte/DMS)