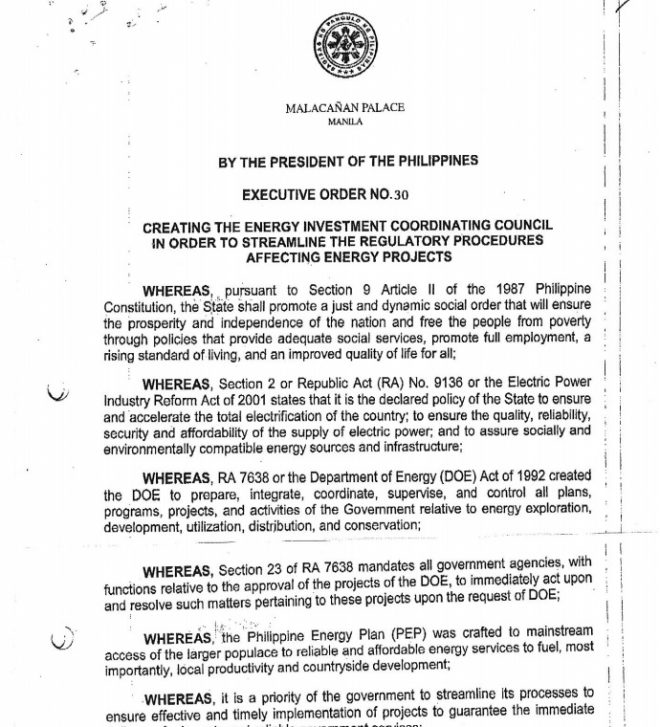 President Rodrigo Roa Duterte signed two executive orders creating the Energy Investment Coordinating Council (EICC) and the Strategy, Economics, and Results Group (SERG) in the Department of Finance (DOF). EO No. 30 established the council, which will lead and coordinate national government efforts on matters relevant to the development of energy investments in the country, particularly Energy Projects of National Significance (EPNS). To streamline the regulatory procedures affecting energy projects, the EO stated the baselines in the processing of EPNS, from prior approvals of applications to actual approval, which are not to exceed the 30-day time frame. To issue Environmental Compliance Certificates (ECCs) for EPNS, the Department of Natural Resources (DENR) will formulate a guideline consistent with the objectives and provisions of this Order. To be headed by a representative from the Department of Energy (DOE), the EICC will convene within 30 days from the effectivity of the executive order and will exercise functions such as the establishment of a simplified approval process, preparation of rules governing the resolution of inter-agency issues, maintenance of an information database and a web-based monitoring system, creation of inter-agency subcommittees, submission of quarterly progress reports, among others. EO 31 organized the strategy group to provide strategic advice to the finance secretary, who likewise chairs the Economic Development Cluster (EDC); conduct fiscal economics policy research; and manage and coordinate transformative reforms of the Finance Department. Under the direct control and supervision of the DOF Secretary, the SERG is composed of Strategy and Results Office (SRO) and Fiscal Economics Research Office (FERO), each headed by an official with the rank of Director IV. The SRO is primarily tasked to develop strategy maps and plans converting priority socioeconomic agenda into executive and legislative action from a fiscal perspective.  It will likewise provide fiscal policy advice, manage up-to-date fiscal economic data bank, prepare implementation plans and build fiscal reform coalitions in support of the priority programs of the Duterte administration The FERO is in charge of the research and analysis, simulation, and monitoring of priority programs.   It will also initiate and participate in the discussions and collaboration with development partners and other stakeholders. The strategy group is co-terminus with the tenure of the finance secretary under the current administration.  DMS