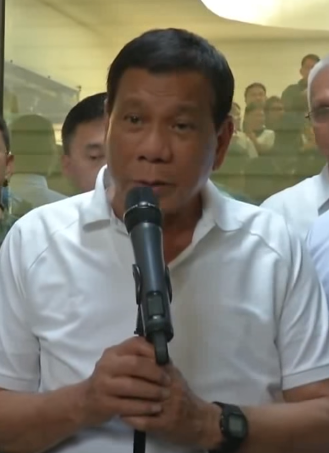 President Rodrigo Duterte said on Wednesday he declined the plan of the University of the Philippines to confer him the honorary doctor of laws degree after drawing criticisms. "With due respect to the University of the Philippines, I do not accept even when I was a mayor, we don't receive as a matter of personal and official policy, I do not accept awards," Duterte said during his trip to Bohol where he presided over a command conference with the state security forces. Duterte said he "did not reject" the award, but "I simply declined." The UP Board of Regents will offer a Doctor of Laws, honoris causa, to the president,  based on university tradition. But there are disappointments over the plan, citing the bloody war against illegal drugs of the Duterte administration. Presidential Spokesperson Ernesto Abella said with or without awards, Duterte will continue to be "a hardworking government worker and faithful servant of the Filipino people." "It (award) is not something that he runs after," said Presidential Spokesperson Ernesto Abella in a press briefing earlier in Malacanang. Davao City Mayor Paolo Duterte, for his part, said Duterte's election to presidency was enough recognition. "No other recognition or honorary degrees could eclipse that," he said. "To the so-called learned individuals who frown upon the plan of the University of the Philippines to grant an honorary doctorate degree to the President, you can have that honorary degree for all we care," he stressed. But the younger Duterte said his family thanks the UP Board of Regents for even considering his father.  (Celerina Monte/DMS)