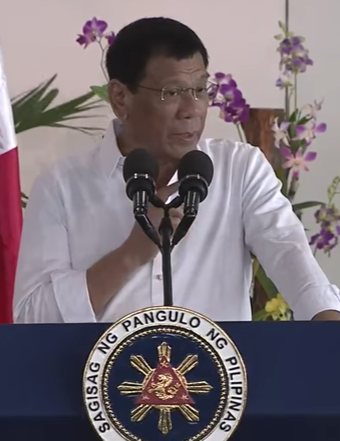 Duterte denies any part in planned impeachment of Robredo

President Rodrigo Duterte denied any involvement on the reported plan of House Speaker Pantaleon Alvarez to file an impeachment case against Vice President Leni Robredo. "(I) Never did anything. And I will not do anything about it.  Ask your questions but I never lifted a finger against anybody. I am finish with that, I am beyond politics. I am not…I am beyond politics I do not want to tinker with it. I just want to focus on my job… which you have given me,” Duterte told reporters before leaving for an official visit to Myanmar and Thailand at the Davao International Airport Sunday. Duterte added he does not mind an impeachment complaint against him as well as  criminal charges that will reportedly be filed against him at the International Criminal Court. Last week, Magdalo Partylist Rep. Gary Alejano filed an impeachment complaint against Duterte at the House of Representatives. “I will not be intimidated and I shall not be stopped by just an International Criminal Court. Impeachment, if that is part of my destiny it is my destiny to go… maybe God give only two years, six months, one year and half to be president of this county fine. Let it that be said that I did not give my promise,, that is what life is all about honoring once commitment to your fellowmen,” Duterte said. “I go by the rules of destiny what give me the presidency was pure destiny,” he added.. Duterte reiterated his commitment to fulfill his election promises to end corruption, criminality and illegal drugs. “May I reiterate that I will comply with my promises, the basic things like for example the corruption, drugs and criminality, Listen to me, I will deliver my promises even if it will cause me my life, my honor and the presidency,” said Duterte. “I can let go all of that but I will comply with my promise. The drive against corruption, the drive against criminality and drugs will resume and it continues and it will be brutal if they do not understand the role of government. Suppression includes all,” he said. “So drop shabu if you want to be alive. If you do not want trouble with government, stop trafficking. I will not be for a moment, be out of focus on that.  Whatever I promised—I will rise and I will fall on this,” he added. (Robina Asido/DMS)