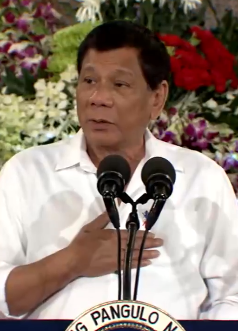 A human rights group said President Rodrigo Duterte released ten National Democratic Front (NDF) consultants from New Bilibid prison early this month. Cristina Palabay, secretary general of Karapatan identified the NDF consultants as Emeterio Antalan, Ricardo Solangon, Joel Ramada, Apolonio Barado, Jose Navarro, Generoso Rolida, Arnulfo Boates, Manolito Matricio, Josue Ungsod, and Sonny Marbella. She said the consultants were released from New Bilibid Prison in Muntinlupa City on Thursday evening.. Palabay said the consultants were granted with "conditional presidential pardon, in line with the peace talks  between the NDF and the Government of the Republic of the Philippines." "This is good news for their families, friends and supporters who have witnessed how their loved ones have been wrongly convicted for trumped-up charges and have endured unimaginable injustices throughout their years in jail. Boates, longest-detained among the 10 and arrested on February 1996, has already spent 21 years behind bars," she said. "Through the efforts of the NDF, counsels, their families and the people’s movement, the State has been compelled to comply with its obligations under the Comprehensive Agreement on the Respect for Human Rights and International Humanitarian Law (CARHRIHL),” she added. Palabay said the release of the 10 NDF consultants “should not be, in any way, used as a bargaining chip by the government to impose on the NDF a bilateral ceasefire agreement and further undermine discussions on the substantive agenda such as human rights and international humanitarian law, socioeconomic and political reforms." "These are actually bread crumbs, because at least 392 political detainees continue to languish in jail and many more are being illegally arrested under Duterte’s martial law. The release of all political prisoners, we repeat, is an issue of justice and should not be dependent on the whim and caprices of the military or even the President," she said. Palabay also criticized Defense Secretary Delfin Lorenzana, Presidential Security Adviser Hermogenes Esperon and Armed Forces of the Philippines (AFP) Chief of Staff Eduardo Ano for blocking the release of the NDF personnel. Robina Asido/DMS