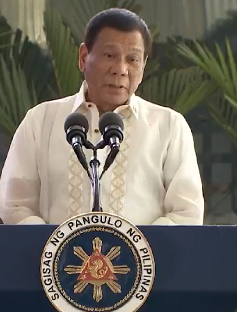 President Rodrigo Duterte slammed on Wednesday United Nations Special Rapporteur on extrajudicial killings Agnes Callamard and a foreign expert, who visited the Philippines and debunked his claims that repeated use of methamphetamine or shabu affects the brain of a user. Duterte said if shabu would not shrink the brain of a person who use illegal drugs, then he himself would ask to make this an industry, replacing the firecrackers industry in Bulacan. "You know if that is good for the Filipinos, I'll just give it. I myself will order that it be cooked instead of (firecracker) powder in Bulacan..I'll be the one to place that in sari-sari (store), free," he said. Dr. Carl Hart, chair of Columbia University's psychology department, during his presentation in a forum about illegal drugs at the University of the Philippines last week, said Duterte's claim continued use of shabu would shrink the brain of the user was a "myth." Quoting Hart, Callamard, also present during the same forum, tweeted, "Prof. Carl Hart: there is no evidence shabu leads to violence or causes brain damage #Philippines drug policy forum." Irked with Hart and Callamard, Duterte said, "she (Callamard) should go to a honeymoon with that black guy, the American. I will pay for their travel. They should be together." He even called Hart as "insane. "He (Hart) said shabu cannot damage the brain. That's the reason why he went here…. He's foolish… I was just listening to one of the stations and I hear the idiot, another idiot in this planet. Imagine, saying that shabu cannot harm a person!" Duterte said. Duterte explained his statement regarding the effect of continuous use of shabu on the brain was based on an "American forensic study." He said illegal drugs are fueling terrorism in Mindanao. "That's why we have see a lot of promising drug lords there again," Duterte added. (Celerina Monte/DMS)