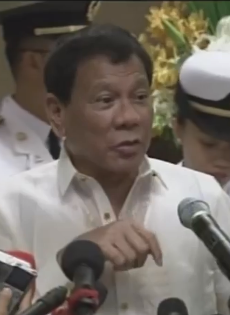 Duterte: I will skip arbitral ruling in ASEAN Summit

President Rodrigo Duterte admitted on Thursday that he would not use the Philippine chairmanship of the Association of Southeast Asian Nations as an opportunity to raise the favorable arbitral ruling in the South China Sea during the summit later this week. In an interview with reporters in Malacanang, Duterte said the award by The Hague-based Permanent Court of Arbitration to the Philippines, which is invalidating China's nine-dash line in the South China Sea, is only between Manila and Beijing. "I will skip the arbitral ruling. It is not an issue here in the ASEAN," he said. Former Foreign Affairs Secretary Albert del Rosario and other Filipino experts have urged the Philippine government to use its chairmanship of the ASEAN to include the PCA ruling in the agenda during the 30th ASEAN Summit on April 29. Instead of the arbitral ruling, Duterte said he might bring up the Code of Conduct of Parties in the South China Sea. "It (COC) might be taken up but we will not talk about sovereignty over what part of the islands there, I said, because that is not an issue before the ASEAN Summit. What is at issue is the conduct of parties in the use of the China Sea," he explained. Asked if China asked him not to include the arbitral ruling in the ASEAN agenda, Duterte said, "nobody tells me what to do or what to say." "China said he's completely ignoring the arbitral. So what more can you ask for it? Make noise? For what?," he said. As to Chinese construction of fake islands in the South China Sea, the President said, "everybody is not happy, so including us...but this is not the issue. Because I said entitlements. I will only bring it up whent the issue is about what is really or what are included in the entitlements. Construction is not one of them." But he said China's fake-island build up is a "violation of the Law of the Sea." In the latest draft of ASEAN chairman's statement, there was really no mentioning of the July 2016 arbitral ruling. It also contained somewhat softer statement regarding the South China Sea, which according to sources were due to the intervention of Laos, a known close ally of China. "We reaffirmed the shared commitment to maintaining and promoting peace, security and stability in the region, as well as to the peaceful resolution of disputes, including full respect for legal and diplomatic processes, without resorting to the threat or use of force, in accordance with the universally recognised principles of international law, including the 1982 United Nations Convention on the Law of the Sea (UNCLOS)," the latest draft read. In an earlier draft of the chairman's statement, Duterte was supposed to mention that Southeast Asian countries "shared the serious concern expressed by some leaders over recent developments and escalation of activities in the area which may further raise tensions and erode trust and confidence in the region." The Southeast Asian leaders were also supposed to reaffirm the importance of enhancing mutual trust, confidence and exercising self-restraint in the conduct of activities and avoiding actions that may further complicate the situation in the South China Sea. When Duterte assumed the presidency, he vowed to take softer stance with China. He has said that he would only bring up the arbitral ruling at the proper time, which is when China starts drilling and exploring in the areas being claimed by the Philippines. (Celerina Monte/DMS)