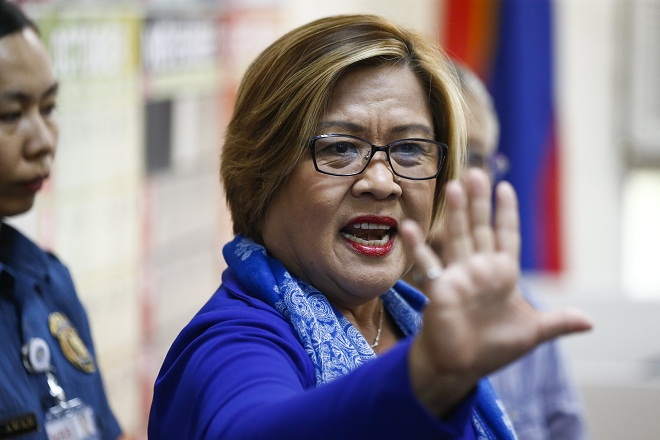 President Rodrigo Duterte slammed anew human rights groups and those sympathetic to opposition Senator Leila De Lima who was on her 1,000th day in detention on Wednesday to keep on insisting to release her.

In a speech at the 80th anniversary of the Department of National Defense in Quezon City, Duterte insisted that the charges against De Lima for her involvement in illegal drug trade in the national penitentiary were true.

"The greatest insult from these people, they refused to understand that the case against De Lima is true. They took the line of the left that she is a political prisoner," he said.

Duterte mentioned De Lima's case when he was talking about the appointment of Vice President Leni Robredo as the anti-illegal drugs czar.

He said he could not understand why Robredo, shortly after she accepted his offer to be the co-chairperson of Inter-agency Committee on Anti-illegal Drugs, has started talking about consulting with the United Nations and other groups and individuals critical of his war on drugs.

Duterte said De Lima is not a political prisoner.

"On my oath as President, I'm telling you, it is true," he said, stressing that the lady senator "collected money" from illegal drug trade.

Duterte accused De Lima was "blinded" by her political ambitions.

"She is not into business, but ambitions can blind you," he said, stressing that De Lima needed millions of money when she ran for the Senate.

De Lima, who has been critical of the Duterte administration, has denied the allegation that she pocketed money from the illegal drug trade at New Bilibid Prison when she was the Justice secretary during the previous administration. She said that she has been politically persecuted.

On Wednesday, a group called Committee for the Freedom of Leila M. De Lima, composed of leaders, activists and organizations from around the world, came out with a full-page ad seeking the release of the senator.