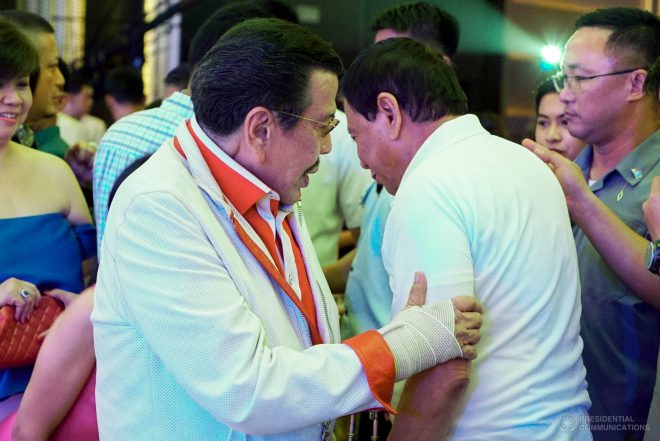 President Rodrigo Duterte joined influential political personalities in gracing the 80th birthday of former president and Manila Mayor Joseph Estrada on Wednesday night at Manila Hotel. Also present in the party, which lasted until before dawn Thursday, were former President Gloria Macapagal-Arroyo, former First Lady Imelda Marcos and son former Senator Ferdinand Marcos Jr., former Vice President Jejomar Binay, and former Senator Juan Ponce Enrile. Insiders said Duterte, who delivered a speech, stayed until 2:30am Thursday. In photos released by Malacanang, Duterte was seen shaking hands with detained former Senator Jinggoy Estrada, son of the celebrant. Jinggoy, who is facing a plunder case for allegedly pocketing multi-million pesos from his pork barrel when he was a senator, was allowed by the Sandiganbayan to attend his father's party. The government is still pursuing cases against the Marcoses. The late president Ferdinand Marcos, who led the country for about two decades, and his family and associates fled in 1986. Binay, on the other hand, is facing graft and malversation cases before the anti-graft court. Enrile is also facing a plunder case for alleged misuse of his Priority Development Assistance Fund when he was  a senator. He posted P1 million bail for his temporary liberty. Then Vice President Arroyo succeeded Estrada, who was ousted from his post in 2001 and was convicted for plunder case. But Arroyo granted him pardon. Prior to his attendance in Estrada'a party, Duterte, in a speech during the Cine Lokal launching in Pasay City, recalled how Estrada called him "low class" when he was still running for the presidency in the May elections last year and yet he was invited in the latter's birthday. "I will bring you back to jail," he jokingly said about Estrada. During the May polls, Estrada supported the candidacy of Senator Grace Poe, daughter of his best friend, late actor Fernando Poe Jr., who was allegedly cheated by Arroyo in the 2004 presidential elections. Arroyo defeated Poe by a margin of only about one million votes. Celerina Monte/DMS