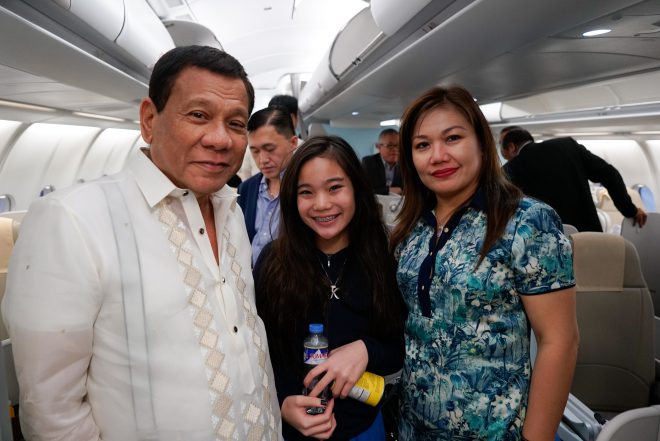 President Rodrigo Duterte left on Wednesday for his trips to Cambodia, Hong Kong and China, where he would also be accompanied by his longtime partner and their daughter, who is on a school vacation. Duterte, who will be out of the country for almost one week, has appointed Justice Secretary Vitaliano Aquirre, Environment Acting Secretary Roy Cimatu and Office of the President Undersecretary Jesus Melchor Quitain as members of the caretaker committee. "Yes, because it’s vacation time and I said I find it hard to… I don't know, I have some medications to take. I do not want these police nurses to go in and out of my room," Duterte said in a press conference at the airport before he left for Cambodia when asked if he would have rest and recreation or bonding time with his family. Cielito "Honeylet" Avancena, Duterte's long time partner, and their daughter Veronica accompanied the president. "Honeylet is nurse and she can very well take care of me. I mean, I would rather have my wife giving the medications because you know, the strangers, they go in and out," he said. Duterte said if he could only have a choice, he would not travel. "You know guys, you might think that I enjoy travel, jetting in and out...Even a few hours, I'm hit by jet lag," he explained. He added if he could only shorten his six-year term to three years, it would be okay with him as he jokingly said a military junta could take over after he appointed some former military generals in the Cabinet. Duterte would attend the World Economic Forum on ASEAN in Cambodia where he and his two other Southeast Asian leaders would highlight accomplishments and developments of the 30th ASEAN Summit in Manila. Duterte said he would highlight his administration's "Build, Build, Build" program as a platform for public-private partnership for positive change. From Cambodia, he will fly to Hong Kong where he would stay from May 12 to 13. According to Duterte, he would be on a "working" visit to Hong Kong where his official schedule is only to meet the Filipino community at 5pm on May 13. "As I have said before, our OFWs are our key partners in national development. I will meet them in Hong Kong to let them know – like I let you know – what your government is doing for you and what you can do to become even more productive partners for positive change in our country," Duterte said. In Beijing, Duterte would participate in the Belt and Road Program for International Cooperations. "In this forum, we will explore opportunities for supporting infrastructure development, trade and economic cooperation, energy development, financial cooperation, eco-environment initiatives, and people-to-people exchanges," he said. Duterte said he would use the forum to advance Philippine development goals. Aside from meeting with Chinese officials, Duterte said he would also have a bilateral meeting with the Mongolian Prime Minister. Duterte did not say if in his meeting with the Chinese officials, he would bring up the South China Sea issue. "My meetings with Chinese officials will focus on a review of political-security developments, economic, cultural, and people-to-people relations. We will discuss recent exchanges between the Philippines and China and updates on economic cooperation since my state visit to China in October of 2016," he said. (Celerina Monte/DMS)