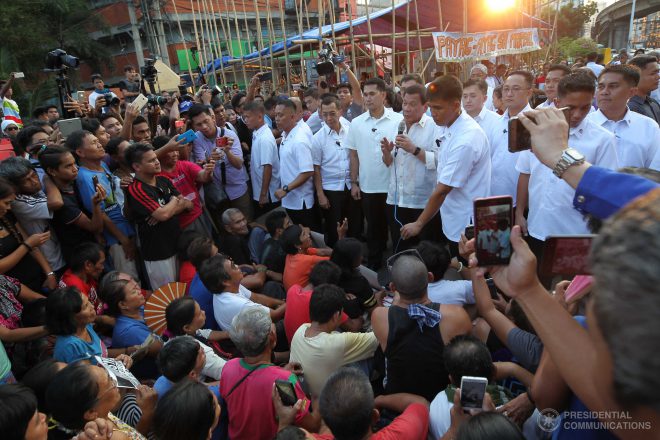 President Rodrigo Duterte met on Tuesday farm workers who have been camping out in Mendiola near Malacanang, and promised to address their concerns. The 200 banana plantation farm workers, who have been staying in Mendiola since May 1, have been demanding Duterte to direct Lapanday Foods Corp. in Tagum, Davao del Norte, to follow government orders to turnover land to agrarian reform beneficiaries. In his dialogue with the farm workers, Duterte advised them to complete all documents and he would even order the authorities to escort the sheriff who would serve the order to Lapanday. He asked he be "given more time" in order to implement all his campaign promises. Duterte ordered his special assistant Secretary Christopher Go to provide food for the protesting farmers. The farm workers, belonging to Madaum Agrarian Reform Beneficiaries Inc. (MARBAI), with members of other farm workers cooperatives, returned to Manila to protest what they called as continued land grabbing and attack against farmers by  Lapanday.. Lapanday’s lawyer is reportedly Duterte's son-in-law Manases Carpio, husband of Davao City Mayor Sara Duterte-Carpio. (Celerina Monte/DMS)