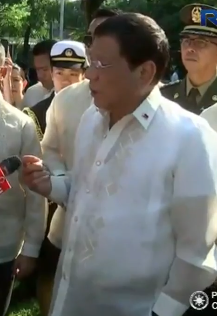 President Rodrigo Duterte said on Friday security escorts may be provided in the ferry service he and Indonesian President Joko Widodo are set to launch later this week between the two countries. Duterte and Widodo, who is on a state visit and participate in the 30th Association of Southeast Asian Nations Summit in Manila, will lead the launching of the Roll-on Roll-off (RoRo) ferry service that will start plying the Davao City-General Santos-Bitung, Indonesia route on April 30 in Davao City. Duterte did not discount the piracy problem that might take place in the RoRo route. "You have to consider also the security concerns. So may be we'll have to agree to provide escorts in the meantime," Duterte said. With the piracy and kidnapping in southern Philippines, Duterte said he might suggest during the ASEAN Summit on Saturday to come up with a "multinational task force" that will help in securing the southern waters, "just like what happened in Somalia." He said he brought this up with Brunei Darussalam Sultan Hassanal Bolkiah during his bilateral meeting in Malacanang on Thursday. To prevent piracy off Somalia, different countries have sent their security ships to the area. In a press conference in Pasay City, Romeo Montenegro, deputy executive director of Mindanao Development Authority (MinDA), said the route to be taken by the ferry service that will be launched on Sunday would be in the Celebes Sea and not in the Sulu Sea where piracy, involving the terrorist Abu Sayyaf Group, is rampant. He said the Celebes Sea is part of "a traditional trading route" between the two countries, thus, he did not see any piracy issue to emerge in the area. M/V Super Shuttle RoRo 12, operated by the Asian Marine Transport Corp., will provide a weekly shipping service to the route with a vessel capacity of 500 Twenty Foot Equivalent Units (TEUs). To sustain the project, MinDA chairman Datu Abdul Khayr Alonto, urged the private sector to support this. "We are calling on and encouraging key industry and business players and traders to participate in this initiative and to take advantage of the business opportunities and benefits that this new route will provide," he said. MinDA said opening of the route is more cost and time-efficient alternative to the usual Manila to Jakarta-Bitung route, which would take about three to five weeks of shipping time. Direct shipping through the Davao-GenSan-Bitung route will take only one day and a half of sailing, excluding port stay, the government agency said. Among the goods to be shipped to Indonesia include animal feeds, fertilizer, construction materials, ice cream products, poultry (halal), fresh fruits, and synthetics. On the other hand, products that would initially be imported from Indonesia include matured coconut, copra, corn, feed ingredients, lumber, cement, high value crops, vegetables, meat, peanuts, aqua products, charcoal, soya, coffee beans, and dugar. MinDA noted in the feasibility study by the Japan International Cooperation Agency in 2012, the Gensan-Bitung route was selected as one of the pilot areas for a RoRo operation within the Brunei-Indonesia-Malaysia-Philippines East ASEAN Growth Area. The study also highlighted that the route can be dedicated to a freight service once shipping service requirements are in place, it added. (Celerina Monte/DMS)