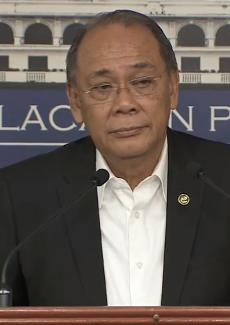 Malacanang is now scouting for a replacement to Environment Secretary Gina Lopez after her ad interim appointment was rejected Wednesday by the Commission on Appointments, Presidential Spokesperson Ernesto Abella said. ‘The president is attending to the possible replacement,” said Abella. Meanwhile, the Chamber of Mines of the Philippines  vowed to work closely with whoever would be appointed as the new secretary of the Department of Environment and Natural Resources (DENR). Nelia C. Halcon, CMP executive vice-president, told the Manila Shimbun they "will make use of the issues she brought forward as a challenge to the entire industry." "We are also environmentalists as we care for the environment and the people on the ground," she said in a text message. Abella cited Lopez's contribution in the Duterte administration for the past 10 months that she headed the department "Secretary Lopez had served the Department of Environment and Natural Resources (DENR) well.  She had profound insight into the deep damage of the Philippine ecological system caused by the mining industry and came up with innovative solutions to the socio-economic conditions of the affected communities," Abella said. The chamber has opposed Lopez's confirmation by the Commission on Appointments  after she ordered the closure of 23 mines all over the country. Lopez also ordered the suspension of the five mining projects and cancellation of the 75 mineral production sharing agreements (MPSAs) with mining firms operating within or near watershed areas. Recently, Lopez also imposed a ban on open-pit mining for copper, gold, silver and complex ores. As to the CA rejection of Lopez's nomination, Halcon said, "we believe the mining industry was able to say our piece honestly and with factual basis and that we relied on the objectivity of the CA members." Asked what would happen to Lopez's orders, Halcon said, "that will be resolved and MICC (Mining Industry Coordinating Council) will still do the audit." The MICC, co-chaired by the secretaries of the Department of Finance and DENR, is conducting a review of Lopez's closure and suspension orders. While Lopez co-chaired the MICC, she had insisted her order could only be reversed by the Office of the President, where the DENR's decision could be appealed. (Celerina Monte/DMS)