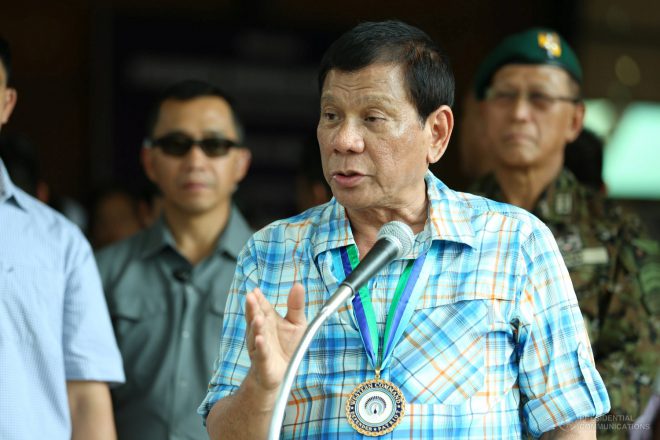 President Rodrigo Duterte said on Thursday he may visit Pagasa Island and place a Philippine flag there to fortify the country's claim in the area. He also ordered the military to occupy the "nine or 10" islands in the disputed South China Sea. Duterte made the statement, the strongest as far as the Philippine territorial dispute with China and other countries is concerned, in a media interview during his visit in Camp Artemio Ricarte in Puerto Princesa City, Palawan. "We tried to be friends with everybody but we have to maintain our jurisdiction now, at least the areas under our control. And I have ordered the Armed Forces to occupy all the so many islands. I think nine or 10," Duterte said. He directed the military to build structures and to hoist the Philippine flag in those islands. "And in the upcoming Independence Day, I might, I may go to Pagasa Island to raise the flag there," Duterte said as he noted there appeared to be "grabbing" of islands. "And what's ours now, let's get them and make a strong point there that it is ours," Duterte added. China has been claiming almost the entire South China Sea, including Pagasa Island off Palawan. Other claimant countries are Vietnam, Brunei, Malaysia and Taiwan. Pagasa is part of the Philippine Kalayaan Island Group. Then President Ferdinand Marcos formally asserted the country's claim over Kalayaan in 1978 through Presidential Decree 1596. Duterte expressed his "full support" in developing the Pagasa airport, whose development  was suspended in 2014 in the wake of the Philippine arbitration complaint filed against China before the United Nations Arbitral Tribunal. The tribunal ruled in favor of the Philippines in 2016, invalidating China's nine-dash line in the South China Sea. "The money is there. I don’t know how the, the Army or the engineering battalion would do it but that development there, has my full support," Duterte said, adding the government would spend for its "fortification." The president said he will officially claim Benham Rise on the east side of the Philippines and will call it as the "Philippine Ridge" because it is like a ridge. "So, might as we claim a ridge because it connects one ridge to another," Duterte said. The defense department earlier raised concern over the presence of Chinese ships in Benham Rise. Asked of his plan on the Philippine military's dilapidated Sierra Madre ship, which has been purposely marooned on Ayungin Shoal in South China Sea, Duterte, in jest, said he would change it with a "luxury liner, which has waiters, food, swimming pool so our soldiers will become fat." Military personnel have been manning the Sierra Madre vessel. (Celerina Monte/DMS)