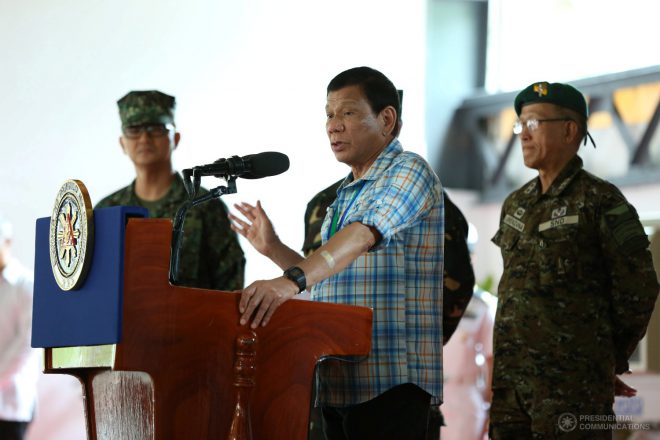 Duterte promises not to allow Kadamay to continue with “anarchial activities”

President Rodrigo Duterte vowed on Thursday not to allow anymore urban poor to illegally occupy housing projects of the government as he called the action of the Kadamay members in Bulacan as "anarchial." In his visit to a military camp in Puerto Princesa City, Duterte reported to the soldiers  the housing units supposedly for them and policemen were "grabbed" by the poor "like us." "But those are the guys who were used by the left. And they are into such anarchial activities," Duterte said in a speech. He said he could not force the Kadamay members, who illegally occupied some 6,000 housing units, as chaos might erupt. "So I'm appealing to you as your President to just give (the housing units) to them, to Kadamay, and do not worry because I will build you a better one," Duterte said. In an interview with reporters, when asked how he would prevent similar situation from happening again, Duterte warned the urban poor from not doing it again. He said the Bulacan incident would be the last. "They can't do it again because next time that I will build houses for the police, I will ask that they be guarded (using) M60 and bazooka," Duterte said. Some lawmakers have criticized the decision of the President of giving the housing units of the National Housing Authority in Bulacan to the Kadamay members, who illegally occupied the structures, starting early March. (Celerina Monte/DMS)