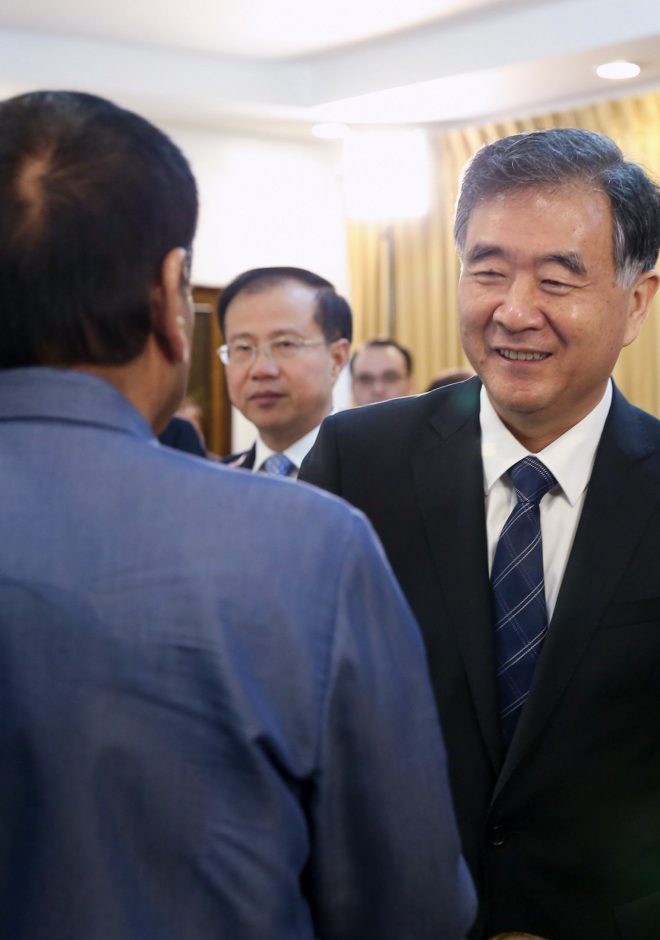 President Rodrigo Duterte reaffirmed on Friday with visiting Chinese Vice Premier Wang Yang the importance of settling the territorial disputes peacefully. The Philippines and China have been engaged in a territorial row over the South China Sea. But the tension has subsided after Duterte decided to take a "softer" stance with Beijing insofar as its claim in the South China Sea is concerned. "President said bilateral ties are found stronger, particularly in trade and commerce, and reaffirmed the importance of peaceful settlement of disputes," Presidential Spokesperson Ernesto Abella said in a statement following the meeting between Duterte and Wang in Davao City. Wang led a delegation in the Philippines. Wang also met with the economic team of the President and signed letters of support on some government projects and programs. He said Wang cited the need to "focus on common interests that bring more benefits than differences." In time for Wang's visit, the two countries exchanged letters related  to the first two feasibility studies of the nine projects to be supported by China. The feasibility studies pertain to the construction of the Panay-Guimaras-Negros Bridges project and Davao City Expressway project. Manila and Beijing also signed the Six-Year Development Program (SYPD) for Trade and Economic Cooperation. The program aims to steer and promote stable and orderly development of economic cooperation, enlarge the scope and enhance the level of cooperation, and drive sustainable and inclusive socio-economic development in both countries. Abella said Wang reiterated China's commitment to follow through with the agreements made during Duterte's visit to Beijing in October last year, including the public-private partnership, trade and investment. Abella, quoting Wang, said the signing of the six-year development program demonstrates China's sincerity, which "he hoped will result in concrete outcomes." Celerina Monte/DMS