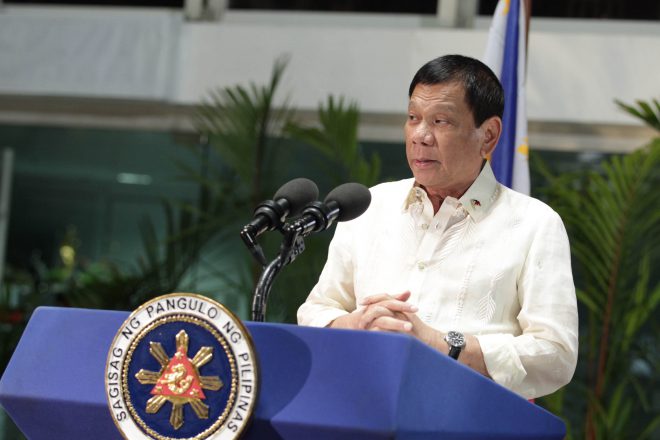 President Rodrigo Duterte said on Thursday China assured him it would not build any structure in the Philippine-claimed Scarborough Shoal. Duterte made the statement following reports that Beijing would build a structure in what is locally known as Panatag Shoal or Bajo de Masinloc and following the advice of Supreme Court Associate Justice Antonio Carpio to be careful on his statements regarding the South China Sea issue and to come out with a "strong" protest against China's plan to construct in Scarborough Shoal. "Why will I quarrel now (with China)? Then in that statement of Mr. Carpio, justice and everybody else, let me tell you now, I was informed that they are not going to build anything in Panatag. Out of respect for our friendship, they will stop," he said in a press conference at the airport in Pasay City upon arriving from Myanmar and Thailand. "That was the assurance given by the Chinese government. They are not going to build anything in Panatag because they want our friendship. They [won’t] do anything to place it in jeopardy," he said. He expressed belief China has a "word of honor". Duterte recalled that when he went on a state visit to China in October last year, he told the Chinese leaders he came in peace and he was not asking for anything because he did not want the Filipinos to look like beggars. "I said I just want to trade with you and I want business because my country needs the money," he said. Asked if he would still push through with his campaign promise that he would go to the South China Sea riding on a jet ski and plant a Philippine flag there, Duterte said in one of his talks with the Chinese officials, they talked about this. He said he was told that instead of taking a jet ski, the Chinese would just pick him up by a helicopter and he would be brought to the South China Sea and have snacks there. China has been claiming almost the entire South China Sea, including those within the 200 nautical miles exclusive economic zone of the Philippines. It reclaimed seven shoals and reefs in the area despite protests by other claimant countries, including the Philippines. But Duterte said he told the Chinese that while they have been claiming the area and the Philippines is also doing the same, "do not impede our travel there." He also said he invited China to send ships, the same way he told the Russians. He also noted the Americans have been sending their vessels in the South China Sea. But he said when China sends its ships, such as its aircraft carrier, "just inform my Navy. Inform the Foreign secretary. Let's play there." Duterte said he did not want a friction in the area because it "could cause an explosion." (Celerina Monte/DMS)