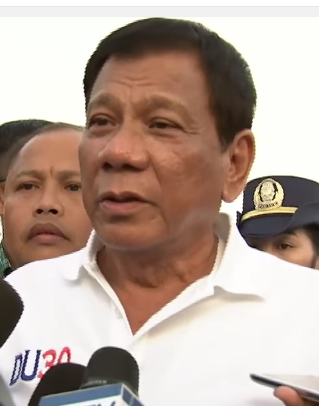 President Rodrigo Duterte said on Monday he has not yet accepted the invitation of United States President Donald Trump to visit Washington. "No, because I'm tied up. I cannot make any definite promise," Duterte said in an interview in Davao City when asked if he has accepted Trump's invitation to visit the White House after visiting a Chinese warship docked in the port. He said he has other foreign trips lined up. "I'm supposed to go to Russia. I'm also supposed to go to Israel," he said. The Department of Foreign Affairs said Trump’s invitation to Duterte to visit White House is to discuss the situation in the Korean Peninsula. DFA Spokesperson Robespierre Bolivar said the US wants to consult its allies and strategic partners in Asia to discuss the approach on the tensions in Democratic People's Republic of Korea or North Korea. "President (Donald) Trump invited President Duterte to White House to tackle the situation in Korean Peninsula. The US wants to consult its allies and strategic partners in Asia to discuss the approach on tensions in DPRK," Bolivar said. Bolivar said there is no date for Duterte's visit to the United States as arrangements will be discuss through diplomatic channels. "But most likely in the next few months because the topic is urgent," he added. Trump called up Duterte on Saturday night and invited him to go to the White House "to discuss the importance of the United States-Philippines alliance, which is now heading in a very positive direction." In the same interview, Duterte said the relationship between the Philippines and the US has changed under the Trump administration. "Things have changed. There's a new leadership. He (Trump) wants to make friends and he says we are friends. So why do I have to pick a fight?," he said. During the administration of former US President Barack Obama, Duterte declared that the Philippines was distancing from the US. Duterte said he did not discuss with Trump his previous pronouncement of distancing from the US. "Nothing of this sort...it was not a distancing, but it was rather a rigt between me may be and the State Departments and Mr. Obama who spoke openly against me," he explained. Obama and the State Department had criticized Duterte's bloody war on drugs where over 7,000 people have been killed since July last year. In the same phone conversation with Trump, Duterte said he raised his concern over the situation in the Korean Peninsula. "It is the concern of everybody, not only us, but the ASEAN guys. The heads of states also expressed their fear of an outbreak because of the threat of a nuclear warhead," he said, noting that the Philippines could also be affected. "I told him that we are as concerned and I supposed that you have the persuasive power, you are showing it to him. There has to be a sense somewhere," he said. Duterte said he also told Trump, "Mr. President, I do not think that you can scare Kim Jong-un with firepower," he said, adding that the "greatest chance of getting some dialogue with American and North Korea is through the intercession of China." The ASEAN countries, following the recent Summit in Manila, came out with a statement raising concern regarding North Korea's ballistic missile launches over the past weeks. (Celerina Monte/Ella Dionisio DMS)