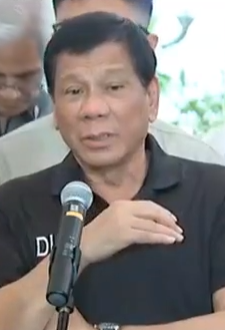 President Rodrigo Duterte said on Tuesday he respects the dissenting opinions of the magistrates who refused to fully support his declaration of martial law in the whole of Mindanao. But Duterte, who has yet to read the high court's decision, said those who have been opposing his declaration of martial law in southern Philippines were "short-sighted," noting that terrorists could easily transfer from war-torn conflict Marawi to other areas in Mindanao. "I would give due respect to the opinions, the dissenting, like questioning the martial law power of the President," he said in an interview during his visit in the wake of a family of five who were massacred in San Jose del Monte, Bulacan. Voting 11-3-1, the Supreme Court upheld the constitutionality of Proclamation 216 imposing the state of martial law and suspending the privilege of the writ of habeas corpus in Mindanao. Eleven magistrates fully supported the declaration of martial law, while the three others wanted it to be confined in Marawi where the government troopers have been pursuing the Islamic State-inspired Maute Terror Group. One of the justices dissented. Duterte said if martial law would only be confined to Marawi, it would be "a very short-sighted thing," noting that the terrorists could escape from Marawi because Mindanao is landlocked area. "When you declare martial law, you have to use your coconut. The gray matter between your ears. Since that is very easy to escape because there is no --- there is no division in terms of land. Continuous and they can go anywhere, and we can have the spillover," he explained. On Monday night, in a video message, Duterte said martial law in Mindanao would remain in effect to counter the "persistent threat of terrorism and insurgency." He commended the government troops for their relentless effort and determination in the goal to retake Marawi from Maute and other local terrorist groups. "I enjoin the operating troops to carry on until our objective of wiping out these enemies of the state and the people has been achieved," he said. He also said the people of Marawi need the government troops' assistance as they rebuild their lives and homes once the miliatary operations come to a conclusion. "By fulfilling this, we must not let our guards down against the emergence of terrorism and banditry in the area," he said. The president also assured the wounded soldiers and the bereaved families that their needs would be attended to. Duterte said he had to declare martial law because he was told by the security officials that the situation in Marawi was "critical."  (Celerina Monte/DMS)