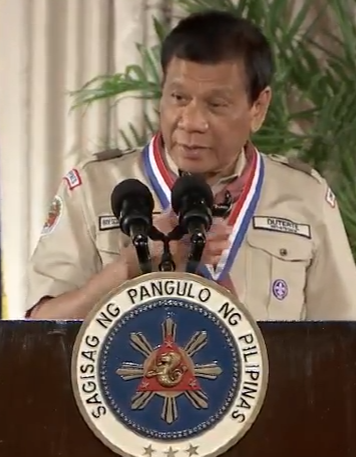 Duterte says he will order police to make the rounds again

President Rodrigo Duterte said on Monday he would order the Philippine National Police to intensify its rounds in public places as part of the administration's war against illegal drugs. In a speech in Malacanang, Duterte told drug addicts to avoid the streets. "You, drug addicts, since you're already identified. Avoid the streets. Stay in your house because you will be picked up. I will order that you will be thrown in the Manila Bay. I will make you fish fertilizer," Duterte said. He said the public becomes afraid if there are people congregating in corners of the streets. "If you want to live longer, don't victimize (others). Now, I will revive the war on drugs, I will ask the police to make the rounds again," Duterte said. Duterte said plazas and other public places are for people who respect the law and not for the criminals. He said he does not need to declare martial law, but he will do everything "to preserve and protect the Filipino, period." Expecting that he would be criticized by human rights groups, Duterte said his critics could just jump from the building. "I don't care. My problem is the Filipino nation and the Filipino youth," he said. Duterte earlier removed the PNP as the lead agency in the war against illegal drugs after a Korean businessman was killed by some rogue policemen under the guise of "tokhang," the police campaign against the drug menace. (Celerina Monte/DMS)