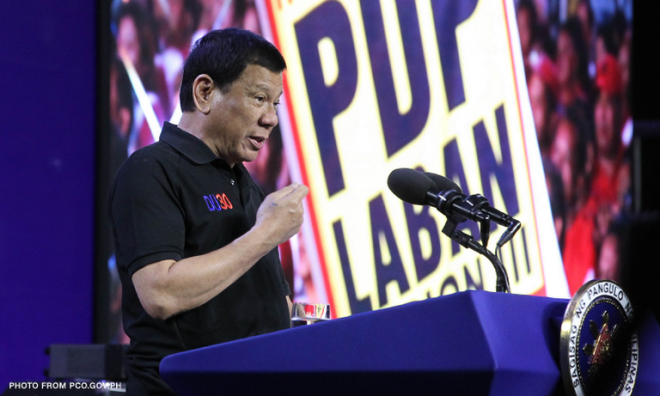 President Rodrigo Duterte said on Sunday that he is ready to resign if any of his children would be involved in corruption.
In a speech at the 35th anniversary of his political party, PDP-Laban, in Pasay City, Duterte said he is ready to go to jail for the alleged extrajudicial killings of drug suspects, but not for corruption.
"If my luck in life is to be a president and I will be imprisoned, it's okay with me, but not for corruption. Killing (it's okay), but not because of the money. It's embarrassing," he said.
"I will make a guarantee, if any of my children...anyone of them could be involved in corruption, government's money, I will resign. (It's for) delicadeza," he said.
Duterte's daughter, Sara Duterte-Carpio is the mayor of Davao City, while his son, Paulo, is the vice mayor. His youngest son from his first wife is not in politics, while he has a teenage daughter with his current partner.
But the President said he would not resign if it is due to the the killings of those involved in illegal drugs.
He again denied the allegation of opposition Senator Antonio Trillanes IV that he has P211 million bank account.
He reiterated his call to the central bank to look into his bank account to determine if he really has such huge bank deposit.
In the same speech, Duterte assured that any compromise agreement that the government would enter into with Mighty Corporation, a cigarette manufacturing company, would be transparent.
The President earlier said that his administration is ready to forgive Mighty, whose owner is his "mistah" and "friend," from tax evasion if the firm would provide P3 billion, double from the alleged P1.5 billion tax deficiencies of the company.
However, during the speech, Duterte said he was told by Finance Secretary Carlos Dominguez III that P3 billion settlement was small.
Any compromise agreement with Mighty should be much higher, he said, quoting Dominguez.
Mighty was allegedly involved in using fake tax stamps, thus, depriving the government of the needed revenue. Celerina Monte/DMS