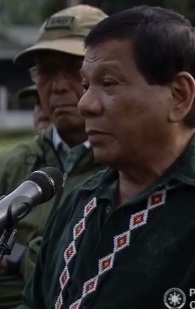 President Rodrigo Duterte said on Thursday that it is “impossible” that he would deal with terrorists like the Islamic State-inspired Maute Terror Group. He made the statement following reports he tried to talk to the Maute militants who have been occupying Marawi City  since May 23. In an interview with reporters during his visit in a military camp in Bukidnon, Duterte said the Moro Islamic Liberation Front and the Moro National Liberation Front could have started the initiative of the talks. "But if that would come from me, I'd be the one to ask from the criminals, including terrorists, that's impossible," he said. He said he would talk with the "revolutionaries" like the MILF and the MNLF, but not with terrorists. He said he would not negotiate with the Maute terrorists because many soldiers and policemen have been killed. At least 400 have died in the fighting which began May 23, forcing Duterte to declare martial law in Mindanao. Duterte said, "If there has to be peace, it would really be peace...let us finish this once and for all." Meanwhile, in a speech in the same military camp, Duterte made it clear that any act of abuses by the military and the police are not part of their job. "Let us be frank here because the police and the army have been receiving much criticisms," he said. But he said so far there were no abusive army members. "My order to the army, kill. If you see that as an abuse, that's your problem," Duterte said. "So I have to save a country. So that’s my guarantee to you," he told the government troops. (Celerina Monte/DMS)